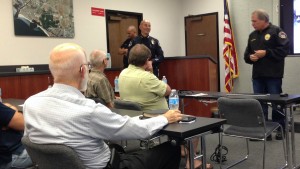 The morning centered around the mass murder incident in a beauty salon on October 12, 2011. Shoemaker served during that event (and continues to serve) as a chaplain for the City of Seal Beach Police Department.

Joseph Stilinovich, chief of police, greeted the pastors and impressed upon them the importance of the role they play in time of crisis.

The main part of the program, Pastors and Churches in the Hour of Crisis: How God Worked through Both When a Mass Murder Happened in Seal Beach, was presented by Captain Tim Olson, who gave an overview of the mass murder incident at Salon Meritage on  October 12, 2011. Then Chaplain Shoemaker shared his duties on that day, as well as the days that followed.

Following lunch, the group toured West Cities Communications (the dispatch center for the cities of Seal Beach, Cypress, and Los Alamitos), which is located in the Seal Beach police headquarters.