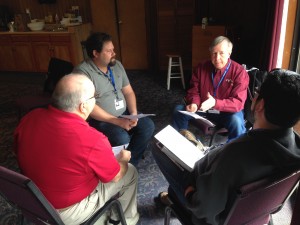 Southwest Focus Retreats participants discuss points in the draft of the Charis Commitment to Common Identity.

Pastors and ministry leaders from California, Alaska, British Columbia, and points east are gathered this week at The Oaks Camp and Conference Center in Lake Hughes, Calif., for the Southwest Focus Retreat.

As with similar regional retreats held in the fall of 2014 in Washington State, Ohio, and Maryland, Dr. Dave Guiles, executive director of Encompass World Partners, is leading the sessions, which is focusing on “Shaping the Future.” It is designed to begin the conversation about the Charis Commitment to Common Identity, a summary document of the biblical convictions, mutual commitment, and common practices for the Grace Brethren movement in North America.

The retreat began Monday afternoon with a brief history lesson via a video-taped lecture by the late Dr. Dave Plaster. In the video, he discusses the development of the Fellowship of Grace Brethren Churches, beginning with Alexander Mack in Schwarzenau, Germany more than 300 years ago. The session was followed by dinner, which doubled as the Love Feast for the evening’s three-fold communion.

Communion was led by Mike Sciarra and the staff of Grace Church, Orange, Calif.

This morning (Tuesday) began as participants broke into smaller groups to review a draft of the Charis Commitment to Common Identity.

See the GraceConnect Facebook page to see additional photos from the retreat.