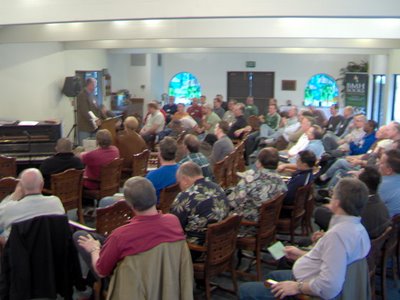 Approximately 50 pastors and lay leaders from Southern California, Alaska, Canada, and other western areas are gathered near San Juan Capistrano for the retreat, which is the third in a series of five being held this year.

The curriculum is focusing on the church and the work of the Holy Spirit, and it is being loosely based on the book Building Authentic Community by Tim Boal, published earlier this year by BMH Books.

The next Focus Retreat will be held at Haines City, Florida, the dates of February 26-28 and the final one will be at Whites Pass, Washington, early in May.