Sowing Seeds in the Ceremonies of Life 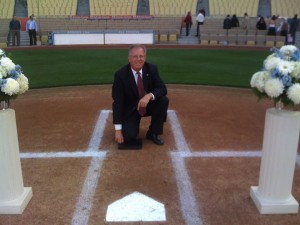 A wedding at Dodger Stadium in Los Angeles afforded Pastor Roy Halberg, who played the position of catcher on a variety of teams, an opportunity to pose at home plate.

Roy Halberg, pastor of Grace Fellowship, a Grace Brethren congregation in Alta Loma, Calif., has performed more than 5,000 funerals and in excess of 2,000 weddings. Most of those are for people who don’t regularly attend church. Halberg sees it as an opportunity to connect with families and to share the gospel with them.

A pastor since 1971, Halberg was between full-time ministries in 1994 when he decided to distribute his business cards offering his services at mortuaries. It wasn’t long before he was regularly officiating at funerals for individuals who didn’t have a pastor or someone to lead the service. Eventually, he added wedding ceremonies to his repertoire.

At the peak, he did 275 funerals and 175 weddings in a year, enough to provide a full-time income. Today he pastors the Alta Loma church on a part-time basis while continuing to supplement his income by presiding at weddings and funerals, though at a slower pace.

As an officiant, Halberg has traveled all over the country to perform exotic and untraditional weddings. But that’s not what he enjoys most about the job. Halberg considers it a ministry that sows seeds for the gospel.
“I probably have conversations with more non-Christians in the average week than most pastors have in a year,” he says. “Before I started doing this, most of my life was spent in the church office preparing sermons for church people. I wasn’t out engaging people in the community, and now I’m out in the community all the time.

“I’ve had people visit my church after I’ve provided funeral services for their family. I think of one guy, I did the funeral service for both his mother and his father… he came and visited the church afterwards. We met for lunch several times, and I had the opportunity to share the Gospel with him over those lunches.”

At funerals, he strives to honor the deceased in such a way that it opens doors for spiritual conversations.

“I frequently am asked after services, ‘Well, how long did you know Grandma?’” It’s then he admits he never met the individual. Yet because he paid tribute to the individual in a positive way, there are occasions to open his Bible and share scripture.

“It’s a great open door of opportunity, especially with funerals. It is a time in a family’s life where they’re open. It’s been a great opportunity to befriend people, to love people, to influence lives for the kingdom.”