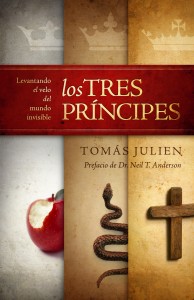 The Spanish edition of Tom Julien’s landmark book, The Three Princes, has been released. Los Tres Príncipes was first distributed at the Grace Brethren Ethnic Pastor’s Conference in Tampa, Fla., in March.

Since then it has been distributed to pastors and leaders in Argentina.

The book was made possible through a grant and generous donations, allowing BMH Books to share the book with Spanish-speaking Grace Brethren pastors, leaders, and others, at no charge.

“Some pastors read the book during the night,” reported Jesus Munoz, director of ethnic ministries S.E, United States for Encompass World Partners, following the Ethnic Pastor’s Conference. (He planned the event and was instrumental in seeing the book was translated into Spanish.) “They said that it was almost impossible to stop reading because it was answering a lot of questions they had.”

Julien wrote The Three Princes, Lifting the Veil on the Unseen World with a desire to provide a foundational theological base for those involved in spiritual warfare. Existing tools helped many people find spiritual freedom from bondage, but he felt there needed to be better comprehension of truths underlying those tools. was written to meet that need. The English version was published in 2011 by BMH Books and is now in its second printing.

Both the English and Spanish versions of the book may be purchased as a digital publication on Kindle, Nook, iTunes, and Kobo.

It has also been published in French, as les Trois Princes, by Éditions Clé, the French publishing house that began as a partnership between Encompass World Partners and CrossWorld International.