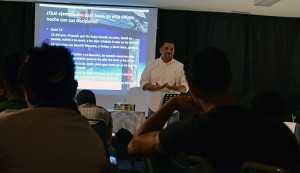 The church plant was almost unintentional, according to Chavez, who moved to the area with his family to be near his mother, who is sick. As he settled into a secular job, people discovered he’d been a pastor and asked him to lead a Bible study.

“What kind  a question is that for a church planter?” he says. “I spoke to my wife and we prayed about it.”

So in September 2011, a Bible study began in the living room of the house the Chavezes rent. Within a month, there were up to 20 adults attending and they began looking for another place to meet. They found a space that would accommodate the growing group that is located next to a large Hispanic community.

The group began to pray and felt led to form a church, launching on January 15, 2012.

“Jesus began to bless this ministry and people begin to attend to church,” says Oscar. Others were inviting friends and family. Two months later we had our first seven baptisms. Praise God for his faithfulness,” he adds. After almost 4 months, their attendance ranges between 40 to 60 people on Sunday. This month, small groups will begin meeting in five different homes.

Oscar asks for prayer of this fledging church, which is called La Cosecha. “Please pray for us as we minister to those people for the following:

He is also asking that other churches consider coming to help with vacation Bible school and other ministry opportunities this summer. “You don’t need to go to another Spanish-speaking country to see the spiritual and financial need of a community,” says Oscar. For more information, contact him at ocnpat@msn.com.