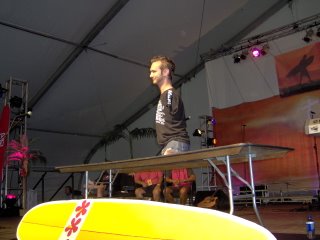 Nick Vujicic, a 23-year-old Australian born without arms or legs, spoke powerfully at the 6 p.m. BNYC session today about how one’s approval should be based on God, not on physical appearance or other criteria.

Lacing his talk with self-deprecating humor, Vujicic began by flipping a tennis ball to an audience volunteer with his small “flipper” left foot, the only appendage with which he was born.

Speaking from Isaiah 61, he mixed scriptural truth with his own testimony and called for commitments, to which dozens of teens responded. The next general session will be at 8:30 p.m., when Dr. Randy Smith from Sebring, Florida, will speak on “end times” based on the Book of Revelation.