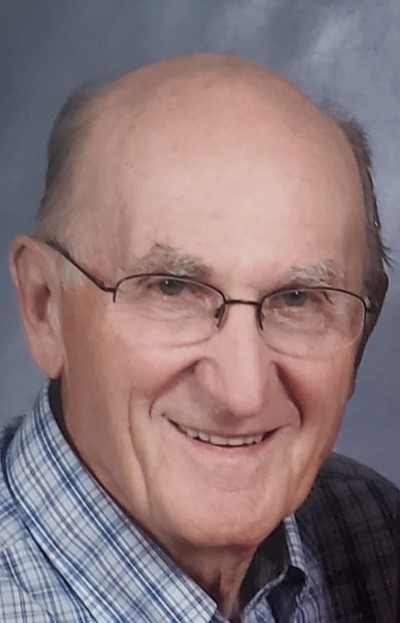 Sterling Theobald ascended into the presence of his Lord and Savior Jesus Christ on September 24, 2020 at the age of 94. He was a beloved husband, father, WWII veteran, medical doctor, and missionary. Sterling was a resident of Grace Village Retirement Community, Winona Lake, Indiana.

The Life of Sterling Theobald (partially in his own words)…

“I was born at home on our family’s Saskatchewan farm homestead on October 22, 1925, the fifth of six children born to Robert and Mona Theobald. My father and mother were strong Christians; my mother led me to the Lord when I was five years old.”

“School for me was a one-room school on the prairies of western Canada. All 12 grades were represented in that one room.” (And yes, he did walk to school even in the winter. True story).

“I was eight years old in 1933 when Hitler was beginning to build his war machine…I was weary of milking cows, feeding pigs and chickens; I wanted a change. When I was older I left Saskatchewan in August 1943 to visit my brother in Minnesota, there was an order for me to report to the (U.S.) draft board on my 18th birthday if I intended to live in the United States. There was no question in my mind what to do but obey. When I returned to Canada for Christmas 1943, I was a new recruit in the US Army.”

Sterling calls his time in the war “a culture shock, but God did provide Christian companionship in the bunk next to me. I was spared from much sinful practice. God saw fit to put this Christian companion and me together during the major part of the war.” Sterling served until the end of the war, mostly in Huy, Belgium, where he assisted in getting food and munitions to the front lines.

“I always felt I should be a medical missionary so I went to Bryan College in Tennessee (with no intention of falling in love or getting married) where I met my future wife.” He and Wanita (Nita) Mae both transferred to Manchester College in Nita Mae’s home state of Indiana. They married on June 12, 1949. He completed his Bachelor of Arts degree there in May 1951.

They were expecting their first child and moved to Winona Lake, Indiana, so Sterling could attend Grace Seminary for a year before beginning medical training at Indiana University in Bloomington. Between October 1951 and July 1956, he and Nita Mae had four children. Sterling completed his medical training and was in his internship when their last child was born. Nita Mae suffered acute exhaustion and was hospitalized for several months. Their application to become missionaries was denied due to her health.

He spent 1957-1966 in Dyer, Indiana, while Sterling describes these nine years as feeling “let down by the Lord,” God was still at work. While Sterling held a job at a steel mill in Gary Indiana, he learned of an urgent need at a vacated doctor’s office in Dyer, Indiana. Sterling took over that medical practice in 1958. He describes those years as “lavishing on ourselves all we could wish for.” Those he tended while there would say that he was also lavishing tender, loving care on body, soul, and spirit of his patients. Sterling delivered more than 800 babies during these nine years and reportedly lost his wedding ring while performing an appendectomy.

It was during this spiritually lean time, he says, that “the Lord brought us to a new hunger for Himself and led us to New Tribes Mission from 1966-1978.” They entered training in 1966. In 1970 they joined the NTM training staff in Durham, Ontario, Canada for two years. From there they were led to establish a missionary medical center at mission headquarters in Camdenton, Missouri, where Sterling, Nita, and a team of staff treated health concerns of missionaries returning from overseas.

In 1979 Sterling and Nita Mae moved to St. Louis, Missouri, where “the Lord led us to become part of a local church.” Sterling worked as a medical doctor for the U.S. Army, biking to and from downtown St. Louis (a sum total of 30,000 miles during their life there) while he and Nita Mae also focused their ministry on establishing a church in Murphy Blair, an inner city area of St. Louis, before joining Old Orchard Church in Webster Groves, Missouri. Nita Mae passed away suddenly in 1992.

In 1994 Sterling asked God for a second wife. Within minutes, his phone rang. It was his sister, Grace, who had been a college roommate with Ruth Ann Adams. Sterling had met Ruth Ann in Bryan College. While he was dating Nita Mae, she was dating George Cone. Ruth Ann had been a widow for twenty years when she and Sterling became reacquainted. Sensing such an immediate answer to his prayer, Sterling promptly became an avid suitor. They were married on January 7, 1995, and moved to Grace Village in Winona Lake in 2005.

They enjoyed traveling the world together, visiting friends and family. Over their 25 years of marriage, Sterling and Ruth Ann had many adventures together hiking mountains in Colorado, visiting children in Africa and Europe, as well as relatives in Taiwan, and traveling all over the United States and Canada to see family, friends, and all the sights along the way.

On these long trips, they delighted in memorizing and reciting long passages of Scripture (more than 430 verses), singing hymns, and praying for their family. Ruth Ann passed into God’s presence on March 5, 2020, just after their 25th wedding anniversary.

Sterling’s gifts and hobbies included: an ability to play piano by ear after his mother taught him around age five or six and with which he blessed others until his final days; an avid mountain climber, he and Nita Mae took their family on long hikes and rope climbing adventures including scaling Longs Peak, a 14000+ foot peak near Estes Park, Colorado; a compassionate doctor and friend to all with a heart to serve God wherever he was, he will be greatly missed but his love and light shine in all who knew him.

Sterling’s life will be celebrated with a service at 10:30 a.m. on Tuesday, September 29, 2020, at Winona Lake Grace Brethren Church, 1200 Kings Highway, Winona Lake, and officiated by his step-son, Pastor Kip Cone. Military rites will be conducted by active duty members of the Army Honor Guard and members of the American Legion Post #49 and V.F.W. #1126 both of Warsaw after the church service.

Sterling will be laid to rest at Jefferson Barracks National Cemetery in St. Louis, Missouri, at 1:45 p.m. on Wednesday, September 30, 2020.

Memorial donations may be designated to either Ethnos 360, 312 W. First St., Sanford, Florida  32771 (Please designate on check: For IMT Rock Solid Kids); or to Millar College of the Bible, 1 Pangman St., Pambrun, Saskatchewan, Canada S0N 1W0 and would be appreciated by the family.