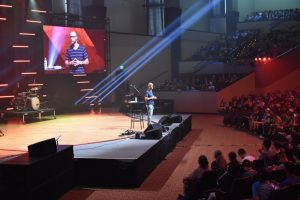 Steve Kozak, vice president of youth ministry at CE National, spoke at the Saturday morning session for Momentum. July 20, Kozak spoke to students and staff from over 100 churches about being a missionary every day.

When he was a head football coach, Kozak was placed in a situation where he “had a chance to make mistakes.” His team was losing by many points and the other team was hurting his players. Kozak looked at the referee and asked “how much more of this are we going to take?” Kozak called off the game. The other team and their fans did not react well. The coach for the opposing team yelled at Kozak. With a few seconds left on the clock, Kozak decided to gather his team to pray and thank God for his protection. The mistake, Kozak said, was that he didn’t pray for the opposing team. He let himself and his team stay angry at them.

“You can’t leave here until you love your neighbor as yourself,” Kozak told the students. It is easy at an event like Momentum to make commitments to God and forget about them. Kozak encouraged them to change their mindset: “What if the kind of moments we’ve had here happen at home?” 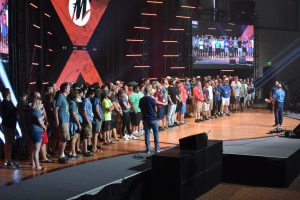 Ed Lewis thanks youth ministry staff for their work.

Kozak then invited Stephanie Taylor on the stage. Taylor is a Breathe Partners missionary. When Kozak asked her how she became a missionary she said it was the small things that lead her to it.  She said, “When I said yes, God showed up.”

At the end, Kozak asked students to write the name of one friend on the card that was handed out before the session. The students were asked to pray for and talk with the person whose name they wrote down. CE National will mail the cards to the youth pastors later for accountability.

Kozak said it was not okay to love God and hate people. “The coach on the other side was placed there for a reason,” Kozak said.

“What if every person in this room brought another person to Christ?” Kozak asked. 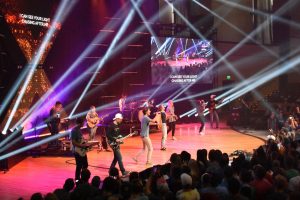