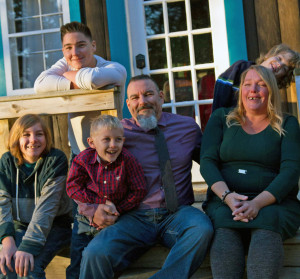 The Gilraine family is moving to New England to help plant a church.

For the past 20 years, Glen and Joy Gilraine have called the state of Indiana home; along with their six kids and two German Shepherds. However, Glen was born and raised in Boston, Mass. He was a Catholic who met and married Protestant wife Joy when she was working as a Boston nanny from her native Columbia City, Ind. After 23 years of marriage and Midwestern living, they’ll be switching back to the East Coast to help plant a church.

The Gilraines were first introduced to church planting through Tom Avey, coordinator for the Fellowship of Grace Brethren Churches, years ago, but Glen was very bashful about the idea. But then Tom introduced them to Jack Brown, the head of Grow New England in May of 2015. The couple then witnessed the worship and fellowship of Northshore Bible Church, a Grace Brethren church in Essex. It was very comforting and spoke to Glen’s reluctance. God’s pushing, plus Joy’s encouragement and prayer, led him to go through a discipleship program. Glen reconnected with old eastern friends via Facebook. This is what prompted Glen to think about a move to Massachusetts; a surprise to Joy, who had been thinking about The Happy Church in Jackson, Kentucky.

Glen and Joy made their decision in June of 2015; Danvers it was; a town about twenty-five miles southwest of Essex, Mass. They have scheduled a week long vacation for the end of May to do some house shopping. An actual moving date is unset, but the family anticipates seeing what God will do. While both of their daughters are grown, Glen and Joy will still be making the move with their four sons and two dogs in tow.

There was some initial unrest in the family at the announcement of moving; for both the kids and the parents. In the past few years, Glen and Joy have heard of the struggles and the joys in planting a church. Yet, the stories hold no fear for Joy and Glen. They may not know what to expect, but can take the steps forward as God is showing them. Glen confirms, “We’re ready to be instruments for Grow New England.”

As a Massachusetts native, Glen can state this certainty with more appreciation and understanding. The East Coast — vastly Catholic, Jewish, or agnostic — presents a different frame of mind toward religion then the Midwest would. New Englanders are a wonderful, friendly people, yet they are also cautious about the relationships that they enter into. This poses a block of communication when talking about Christianity and the intimacy with Jesus Christ.

This is where the Gilraine’s pray: for the preparation of their new roles and the discernment to not assume anything prematurely. For steadfastness, patience, and for opportunities to witness God’s love. In preparation for the move, Glen has been studying with Jack Brown, as well as others through a program known as Antioch. Its purpose is to develop and build intimate connections within their circle of friends. There have been financial struggles and uncertainties still lie ahead for the Gilraine family, but there’s no uncertainty of God’s calling.

“I really enjoy studying Scripture and being given the things needed to grow,” Glen says about his spiritual passions. “Always digging for the P’s and Q’s to better understand so I can better teach and show God’s love and forgiveness. That’s something I won’t sugarcoat or be bashful about; only honest about how brokenness can become a whole.”

Send the Gilraines a letter of encouragement by clicking here. — by Haley Bradfield