Saturday evening’s session had an air of excitement as over 2,200 students returned from a day spent scattered across central Indiana, sharing the gospel and engaging in service projects for organizations in several cities. Students shared stories of not-so-chance encounters, answered prayers, and small acts of service adding up to big changes in their own lives and those they served.

“God can use even the smallest things to bring him glory,” one student noted.

Jeff Bogue took the stage to challenge and encourage them, who will return to their normal lives this Sunday morning. He encouraged them to be ‘fools for Christ,’ drawing from the biblical example of David, who was just a teenager with a slingshot who defeated the giant Goliath.

“In and of yourselves you are the foolish things in the world’s eyes. God takes those normal things and he confounds the systems of the world. We are fools for Christ,” he stressed.

“When you go home you’re going to have to learn to stand on your own – believe and own what you committed to. There has never been a time, ever in the history of Christianity, that the Christ follower fits cleanly into the culture they are a part of…it’s a culture that says, ‘if you actually live what you believe, you’re crazy.’”

Bogue reminded students why David was so confident in the face of adversity: with God’s help and presence, he had already killed a bear and a lion.

“Instead of the armor, he goes for something he knows God has used before – the five stones and a slingshot in [his] hand.”

Drawing on the theme of the week, he continued, “[His] comeback is this rock; the faithfulness of God.”

He concluded: “You want to follow Jesus? The giants are going to head right for you…It’s not a spiritual high [here at Momentum]. We’re having logical adult conversations about Christ. Maybe you had some clarity; you’ve immersed yourself in the heart and mind of God.”

Students had the opportunity to take home a token of the week: a small rock, like David’s, with a word or phrase written on it that would help to remind them of what they learned during the week. Then, the floor shook with dancing as the Jordan Howerton Band led the auditorium in a night of worship and celebration, complete with giant balloons and colorful lights. 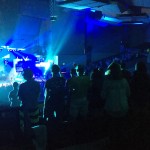 It was a night of celebration during the last session at Momentum Youth Conference. 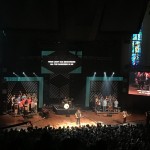 The Jordan Howerton Band took the stage one last time during the Saturday evening Momentum session. 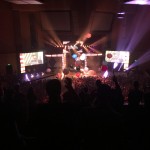 Balloons filled the air of the auditorium as students danced and sang. 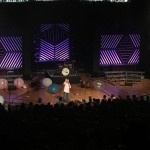 Jeff Bogue challenged the students to be fools for Christ. 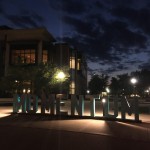 Sunset on the last night of Momentum 2017.