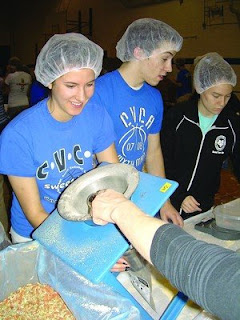 Cuyahoga Falls — Students at Cuyahoga Valley Christian Academy heeded God’s call to feed the hungry, packaging around 108,000 meals to be sent to Third World countries. One of the event’s student organizers said she wanted to take an active role in saving lives.

“It’s a tangible way to know that you’re helping them,” said senior Cassie Bogden of Macedonia. “Instead of just giving money to an organization, you’re actually able to touch the food, put it into a bag and a box and see it shipped. And you know someone’s going to open this bag and feed it to their children.”

Cassie teamed up with an organization called Feed My Starving Children that enables volunteer groups to provide and actually pack life-giving meals for millions of people. As a result, Cassie led the student body of CVCA to raise $17,000. On March 20 this $17,000 turned into 108,000 meals packed by their own hands and sent to Third World countries…

Cassie and senior Joshua Kontur of Macedonia learned about Feed My Starving Children through their involvement with the youth group at their church, Western Reserve Grace Church in Macedonia. Prior to that, Cassie and Joshua had traveled to Africa on a mission trip where they saw firsthand the poverty in that country.

“When we came home and got to pack some food and help out, it was a really good way to help people we saw there while we were home,” Joshua said. “So then we were like, ‘Why can’t we just bring it to school?'”

Cassie and Joshua presented their idea to work with FMSC to Chrise Thompson in the school’s student ministries department, and then to Headmaster Mike Bova. “God just took it all from there,” Cassie said. “He was behind it, and it never would have gone anywhere if He hadn’t been involved.”