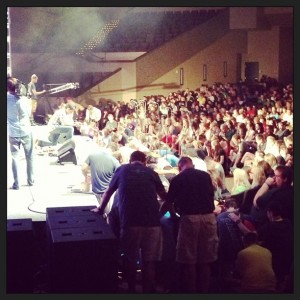 About 100 students made first-time decisions to follow Jesus on Wednesday night at Momentum Youth Conference, the annual event sponsored by CE National. They responded to an invitation issued by the evening speaker, Afshin Ziafat, a pastor from Houston who was raised in a Muslim home.

“You are not a Christian because you came down this aisle,” he told the students assembled before him. “The only way you are saved is because of what Christ did on the cross 2,000 years ago.”

Earlier he had shared his personal story of faith intermingled with the story of Abraham and Isaac. Looking at Genesis 22, he examined God’s call on Abraham. “The testing is not for God’s benefit, but ours,” he said. “God is using the trials in your lives to test your faith.”

Abraham was called to sacrifice his son. In Ziafat’s case, he had to let go of his own father, who disowned him when Afshin came to faith in Christ.

“What is God calling you to lay down?” he asked.

He encouraged the students to worship God in the journey. For Abraham, it was at least three days – a long grueling marathon. For Ziafat, it has been loving his father and being consistent in his faith since he accepted Christ as a teen. The result has been seeing several family members also accept Jesus as Lord and Savior.

He noted that the text says two people went to worship – Isaac worshiped, too, even though he realized he was to be the sacrifice. “This story makes absolutely no sense if it doesn’t point to Jesus Christ,” he said.  “That ram, whose horns are caught in the thicket, is a picture of Christ,” he added. “Just as Isaac was restored to his father, God provided a substituted in the form of Jesus.”

See photos from the day at the Momentum Facebook page.