A story on today’s espn.com is a follow-up to a decision made by Jerod Cherry at Momentum Youth Conference in 2008. As the students raised funds for an orphanage in Thailand, he offered to sell one of three Super Bowl rings with some of the proceeds going toward Asia’s Hope. A portion of the story appears below. Click here for the complete article. 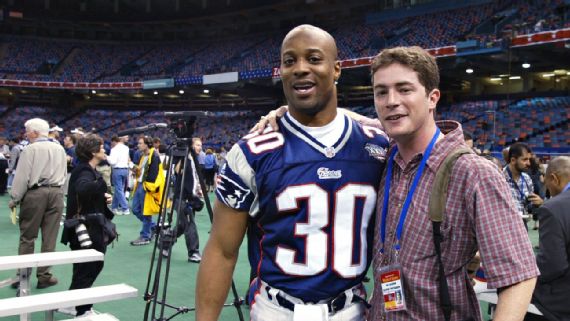 Jerod Cherry, seen here during Super Bowl XXXVI media day in February 2002, says he knew in 2008 that he had to donate the ring that meant the most to him.

Jerod Cherry was attending a religious youth conference in 2008 when he ran into a staffer who had a thought about the three Super Bowl titles he won with the New England Patriots. The gathered teens had fallen $20,000 short of their fundraising goal for building an orphanage overseas, and the staffer, Courtney Cherest, wondered whether Cherry might be in the mood to cover the difference.

Cherest was joking, kind of. She was a Peyton Manning fan and something of a Tom Brady hater, and when Cherry walked by her during a break, she asked, “Hey, man, are you going to give up one of those rings?”

Cherry laughed, kind of. Then he went home, went to bed and lay awake engaged in a 12-round heavyweight fight with his own thoughts.

Even if Cherest had just been messing with him, hey, everyone knows there’s an element of truth in all humor. That same day, Cherry had been touched by an underprivileged kid from West Virginia who spoke at the Momentum Youth Conference in Cedarville, Ohio.

“He didn’t have a dime to his name,” Cherry recalled, “and he was giving 25 or 50 cents, whatever he had in his pocket, toward the goal.”

Cherry was hit by this moment from the blind side. He was helping at this event only because his wife was serving as a volunteer. He had no clue he was walking into a day that would inspire him to help protect two dozen orphans in Thailand from the scourge of extreme poverty, drugs, sex trafficking and education-free childhoods.

He was meant to be in this place, at this time. “To be there,” he said, “was to see scenes of humanity at its best.”

Cherry was moved by a presentation that included the image of a starving, emaciated child in a faraway land and of a nearby vulture apparently waiting for the child to die. “I’m a father with four kids, and something like that really puts you in your place,” he said. “You’re thinking, ‘Oh my gosh, someone is actually living like that.’ And here I am throwing some of my food away.”