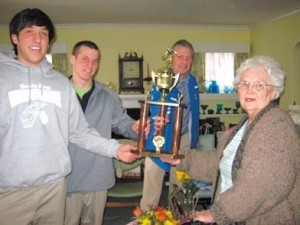 From today’s Hagerstown (MD) Herald-Mail Newspaper. This is an excerpt–to read the entire article click here.

HAGERSTOWN — For years, Andrew E. “Andy” Auxt could be spotted in the corner of the gymnasium at Heritage Academy varsity basketball games, armed with his lawn chair and a cushion, according to his daughter, Sharon Auxt White.

When the 91-year-old Chambersburg, Pa., native died Feb. 9 from injuries sustained in a fall at his home, Heritage coach Michael Kidd said the team wanted to find a way to honor their “longtime supporter.”

The Auxts “were great encouragers. Every time you walked past, they’d always have something encouraging to say,” Kidd said.

On Thursday, 16 days after Andy Auxt’s death, Kidd picked up some of his players and they went to the Auxt family residence to present to the widow a 2 1/2-foot trophy the team won in last week’s Mason Dixon Christian Conference Tournament.

“We wanted to let her know how much he meant to us,” Kidd said.

“Encourager” was an appropriate word to describe her father, White said.

The word came up repeatedly in the cards and letters that her family has received since her father’s death, along with the phrase “gentle giant,” from those who knew him