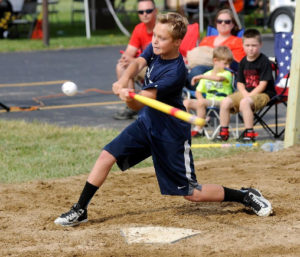 Zack Shoudt, playing for the Bill Harris team, cuts loose with a swing during the Wifflefest middle school tournament Saturday at Southview Grace Brethren Church. The 18-year event had over 100 teams sign up to play this summer. (T-G photos/Austin Malchow)

Youths turn out for Wifflefest

Many area kids’ athletic talents were showcased in the elementary and middle school tournaments at Wifflefest XVIII on Saturday at Southview Grace Brethren Church.

“It was a fantastic day,” said Southview Grace Brethren Church pastor Mark Abel, the organizer of the 18-year event. “A lot of good people coming out. So proud of our church; they work hard and work together. So proud of the community that comes out.

“It was just fantastic from start to finish,” he said.

Ending just before midnight, the junior high tournament, which had 23 teams partake in the action, was won by the White Mambas, a squad consisting of players from Ontario. The Mambas eked out a 6-5 victory over Mid Ohio Prospects in extra innings to claim the title.

With the game scoreless heading to the bottom of the fourth frame, the Mambas plated five runs; however, Mid Ohio — made up of players from Jeromesville — responded with five runs of its own in the top of the fifth stanza, sending the game into extra innings. The Mambas whiffed both Mid Ohio batters in the top of the sixth, and they had a runner at third in the bottom of the inning with one out, but the next hitter went down looking.