Tim Tebow’s appearance during Friday’s chapel at Grace College, Winona Lake, Ind., was reported by the online news site, InkFreeNews. A portion of the story appears below. Click here for the complete article. 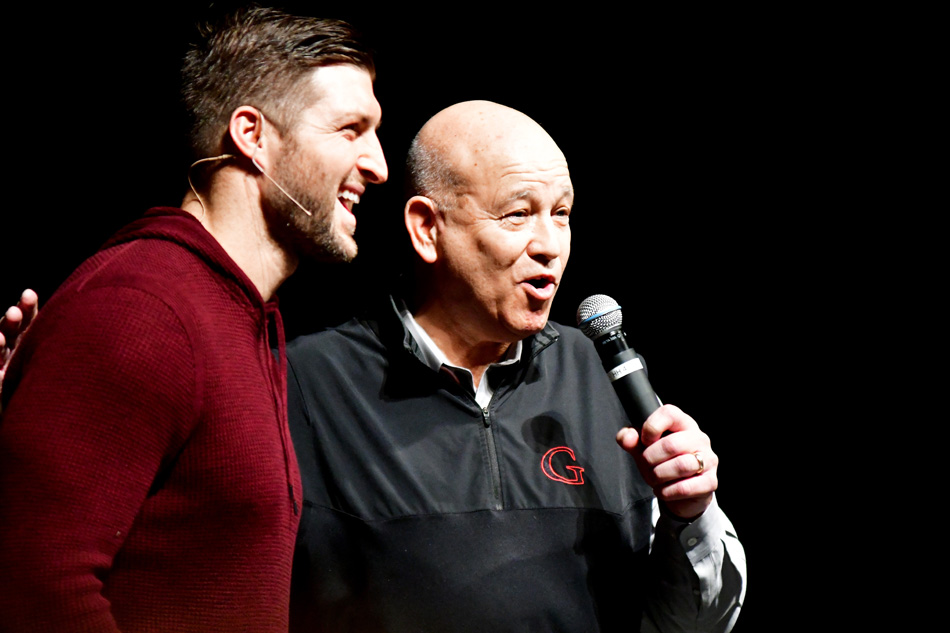 Tebow and Grace College President Bill Katip share a moment on stage ahead of Tebow’s presentation.

WINONA LAKE – In front of a capacity crowd at the Manahan Orthopaedic Capital Center, the good words were spoken at Grace College’s Friday morning chapel. Those words, however, were spoken by one of the most sought-after public speakers in the business.

Tim Tebow, yes, THAT Tim Tebow, stopped by Grace as the apex guest speaker for the college’s career week. One of the largest crowds to ever convene on a non-graduation ceremony, perhaps only rivaled by former First Lady Laura Bush’s appearance about a decade ago, Tebow delivered what was expected.

His story of becoming a public figure, first as a multi-talented quarterback in high school trying to narrow down college selections, becoming a marketable figure at the University of Florida, then onto the overexposed world of professional football and later to a current career endeavor in pro baseball. As he dove into his college choices, narrowing between Alabama and Florida, his faith became a big help in his decision, as did his growing relationship with then-Gator coach Urban Meyer.

“I thought I would feel great, feel amazing,” Tebow said of Signing Day, which was in an auditorium full of Roll Tide and Gator Nation. “I was so stressed out, I felt like I was going to let a whole state down.

“I had been dreaming about it for so many years, and I had no idea what I was going to do.”

Tebow’s decision to go to Florida set him on a path that included a Heisman Trophy award and two national championships. Upon being drafted into the NFL with the Denver Broncos, “Tebowing” had become a cultural phenomenon and his lore was being chiseled. An overtime touchdown throw in the 2011 playoffs against the Pittsburgh Steelers sent his persona into hyper drive, and not only crushing the dreams of Grace College President Bill Katip and Steeler Nation, but bringing attention to Tebow’s faith on a mega scale.

Tebow’s central message was how his faith has helped him get through many difficult moments and has been a constant force in his life. He relied on his faith to help him decide what college to go to in order to play football, helped him prepare and focus for big games in the NFL and what he will do outside of sports for a much bigger calling.