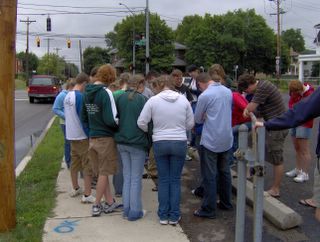 A group of teens gathered in downtown Dayton, Ohio, to pray Wednesday afternoon before fanning out into neighborhoods to do servant evangelism. Though reports have not all come back, at least one salvation decision was reported by teens from the Penn Valley church in Pennsylvania, and many teams had stories to tell about people they prayed with and those they served by pulling weeds, cleaning porches, and more. One woman received comfort and prayers from teens from West Milton, Ohio, because her house was broken into the night before, and she was dealing with fear. Blitz teams worked neighborhoods in Cedarville, Springfield, and Dayton, Ohio. Andy Brightbill, who directed the project, said he hoped many churches would catch the idea of making contact in their neighborhoods this way.