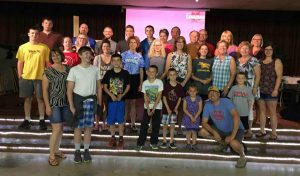 The team from Portis, Kan., traveled to Bow Island, Alberta, to help with various projects, and created a lasting bond between the two churches.

You may think $10 can’t buy much. But it bought the Portis, Kan., Grace Brethren Church (Dave Sarver, pastor) a testimony like none other through God’s power.

A few months ago, the church of 70 decided they wanted to send a group to aid Island of Hope Church, another Charis Fellowship congregation in Bow Island, Alberta (Oliver Edwards, pastor), with building projects and community outreach.

The Portis church figured they needed to raise about $7,900 to cover the cost of the trip and the building project. Being a smaller church, this amount would require a bit of fundraising.

Sharon Wolters, a member of the Portis church, was inspired by an idea to raise money that the Worthington, Ohio Grace Brethren Church (now Grace Polaris Church) had carried out years ago. The idea was to provide $10 in an envelope to 60 people (the $600 had been provided by a donor) and encourage participants to pray and invest the money in any way they wished.

Wolters, being herself very missions-minded, was able to champion this idea to her church, and the Portis congregation embraced it.

“People just got really creative. Everyone took their own talent and did something with the $10,” Wolters says.

Ideas ranged from selling white chocolate-covered popcorn, watercolor paintings, pies, and quilts. Using Facebook allowed many participants to publicize their products, and it caused an encouraging response from their community.

“One participant received a wad of cash from one person that included $100. She went back to return the extra cash, thinking it was a mistake. The donor said, ‘No, we think this is the coolest thing ever.’ We just have story after story,” Wolters shares.

Three girls ran a lemonade stand, and a local kindergarten teacher heard about it on social media. The teacher brought her morning and afternoon classes over and bought them all drinks and cookies.

“She wanted her class to see that even young people can do good things,” says Wolters.

At the beginning of June, the congregation collected envelopes back from participants to see what had come of the ten-dollar challenge. The congregation raised an astounding $8,000.

“We were just coming together as one and cheering each other on,” says Wolters.

Even before they took their trip, the Portis church recognized that God doesn’t need a megachurch to accomplish things.

“When, instead of ‘doing’ church, you just ‘be’ the Church, a small church can accomplish great things,” Wolters says. “People in the community were impacted in a way we did not anticipate. Sometimes you get discouraged, but when that happens, God makes us more prayerful.”

And in prayer, God’s will becomes apparent and attainable.

[Connect:] Click here to send a note of encouragement to Portis Grace Brethren Church as they continue to look for ways to support missions.