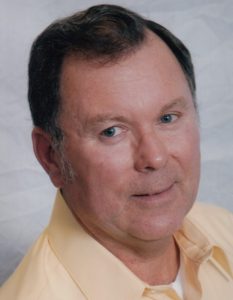 Terry moved to Winona Lake as a college student from Johnstown, Pa. He has been a resident of Winona Lake since 1964. Terry earned his Bachelor of Arts degree in 1967 from Grace College, and additionally completed the class work for the three-year Grace Seminary graduate program in 1972.

He began working for Grace College in 1964 in the Custodial Department. He then left the College’s employment, and worked at Robinson’s Supermarket, the Warsaw Locker Plant, Ditto’s Supermarket as Meat Department Manager and Duane Gable’s housing construction…never afraid of a hard day’s work. Terry returned to Grace Schools as the supervisor of approximately 75 student workers in the Housing Department. He transferred to the College Maintenance Department in 1972, working there continuously until 1984. During that time Terry was also employed as full time Chief of Security for Grace College for nine of those 12 years. While working at Grace, Terry became a Winona Lake Volunteer Fire Fighter, achieving Firefighter Second Class status. He donated materials and labor for the construction of the Winona Lake Fire Department building.

Terry owned and operated his own business, Howie Heating and Cooling, since 1972, installing and servicing furnaces and air conditioning systems in the Kosciusko County area. His business was given the Outstanding Dealer award of Tempstar Heating and Cooling Products for 12 years. He also began as a part-time paid officer for the Winona Lake Police Department on April 30, 1982, and as a full-time officer on June 30, 1984. He was graduated fifth in the 85-80 class of the Indiana Law Enforcement Academy also having earned the expert marksman award and certification as an Indiana EMS First Responder. He also served as Town Marshal from 1990-1995. One of his greatest honors was to see his son, Jeffrey, become a Kosciusko County Sheriff’s Department jailer, then a deputy and to be able to serve alongside him in local law enforcement for several years.

Terry volunteered with the American Cancer Society as well as the March of Dimes “Jail and Bail” program. He served as a trustee for the Winona Lake Grace Brethren Church and on the Kosciusko County Local Coordinating Council of the Governor’s Commission for a Drug Free Indiana. He has been a member of the Indiana Association of Chiefs of Police, the Fraternal Order of Police, Kosciusko County Republican Party, and IDEM’s “Protecting the Environment Program.” He always kept busy, even during his “retirement years.” He continued to operate his business, Howie Heating & Cooling, as well as continuing to be active in his service involvements in the Warsaw-Winona Lake community. Terry had a passion for working on and driving his Model-T and Model-A cars. Most of all he always enjoyed spending time with his family and will be dearly missed by all.

Terry’s life will be celebrated with a funeral service that will be conducted at 10:00 a.m. on Monday, December 9, 2019, at Redpath-Fruth Funeral Home and officiated by Dr. Bill Katip. Burial will follow with a graveside service at Oakwood Cemetery of Warsaw.

Memorial donations may be directed to Right to Life of North Central Indiana, P.O. Box 1162, Warsaw, Indiana  46581-1162, or to the Grace College Patti Howie Tucker Memorial Scholarship Fund, 200 Seminary Drive, Winona Lake, Indiana  46590 and would be appreciated by the family.

Several tributes to Terry have appeared in local media. See: