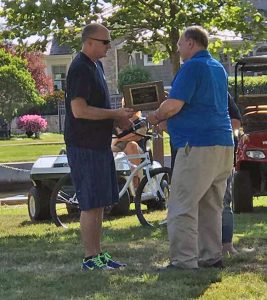 The award is given annually by the town of Winona Lake, Ind., and sponsored by Judy Reneker, in honor of her late husband, Bill, who died in 1993 and who had served as Winona Lake town council president.

Below is the citation, which was presented by Craig Allebach, Winona Lake town manager.

Bill Reneker was the president of the Winona Lake Town Council when he died in 1993 at the age of 57. He was one of those persons who was always “giving back” to this community and the business of bettering Winona Lake was a high priority for him. He looked forward to evenings when he would come home from work, driving under the viaduct on Argonne Road and catching a glimpse of the lake and the town. He felt like he was “on vacation.” He loved the Lord and valued the spiritual heritage of our town.

After his death, it seemed only fitting that an annual Bill Reneker Community Service Award be given by the Reneker Family and the Town of Winona Lake to an individual who had the spirit of “giving back” and worked toward bettering our community.

This year’s recipient was born in a small town in western Pennsylvania in 1942. His mother likes to tell him that with their last name being WHITE, the “big” Christmas song that she heard through the halls of the hospital that year, was WHITE CHRISTMAS.

The White family had a tradition of traveling to their annual church conference for the Fellowship of Grace Brethren Churches which was held every summer in Winona Lake, Indiana, so Terry grew to love the town early in his teen years.

In 1960 he enrolled as a music major at Grace College, and there he met his wife Sharon. The two married in 1965 with many Winona Lake friends participating in their Hagerstown MD, wedding as the college choir sang, and their music professor presided over the wedding.

Both graduated in 1964 and Terry spent the next year earning a Master’s degree at Indiana University. 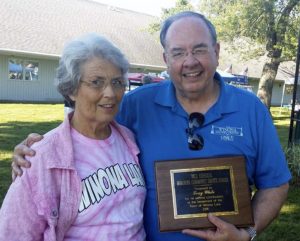 After one year of public school teaching, he was invited to join the Grace staff as Director of Public Relations, and also taught until 1977 in the journalism department. During that time he wrote the self-study which led to gaining accreditation for the college. When the Journalism position was eliminated due to budget cuts, he moved for 15 years to Minneapolis and then for 12 years to Reston, Virginia.  But the heart’s desire of the couple was always during those 27 years, to return to Winona Lake.

That dream was fulfilled in 2002 when the Brethren Missionary Herald publishing company hired him to resurrect their Brethren communication publication.

Terry jumped right back into town involvement after attending the November 2003 Town Banquet where Steve Grill gave an enlightening update on all that had transpired to renew the vibrancy of the town during the Whites time away.  Totally enthralled at what Brent Wilcoxson and Dane Miller had done to transform the Village, he, along with his project manager Ann Myers, did amazing updating, transformation, and landscaping of the Herald Bookstore on Kings Highway.  He returned to the church, Winona Lake Grace Brethren Church,  where Sharon and he have been members since 1960, and quickly became involved there in several areas of service including music and board leadership.

As 2013 and rumors of it being the one-hundredth anniversary of the founding of the town emerged, he began searching for information as to who was chronicling the history of the town.  His inquisitive mind could not let it rest, and while there were lots of bits and pieces of the history in the Reneker Museum, Al Disbro’s photographic account and a few others, he longed for a comprehensive history to be compiled.  His innate writing skills and love of research kicked in and his 300-page work entitled Winona at One Hundred was ready in time for the centennial celebration.

That book has given him a platform for promoting the town on TV and Radio stations and at service clubs around the area and throughout the state.  It also has morphed into making him logically a knowledgeable docent for the Winona History Museum where he volunteers four days a week promoting the wonders of his beloved little town.

In researching material for the book, his gregarious nature led him to make friends with locals from all walks of life, and that has led him to become involved in Winona-related clubs and organizations, such as the Wagon Wheel Board, Symphony of the Lakes, the Town Board, the local ministerial association, and The Winona Lake Arts Commission. As a member of the town Publicity Committee, he publishes the town Facebook page.

He’s back teaching at the college where he gets his journalism students involved in the life of our town, through attending and reporting on Town Board Meetings, and writing feature stories of local interest for local publications, such as the Times-Union, Lake City Living, and On the Lake.

Most recently he told his wife he was going to a meeting of The Winona Lake Comprehensive Steering Committee.   When she asked him why he had joined yet one more committee, he replied, “Because I love this town, and want to do what I can to further influence the coming generations to preserve and appreciate it….”

Below is a video of the presentation, which begins at about 4:18.