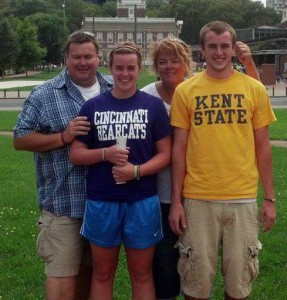 What happens when two kids decide to take Jesus’ command to share the gospel seriously? How about an entire family now faithfully serving the Lord?

When Taylor Fike was 16 years old, he was invited by a friend to come to the high school ministry at Grace Church, a Grace Brethren church in Wooster (Bob Fetterhoff, senior pastor). He started attending, and soon after was invited on a mission trip to San Francisco during the summer of 2010. During the trip, he realized his need for a Savior, gave his life to Christ, and came home ready to back up his decision with action.

Around the same time, Taylor’s younger sister, Adrianna, then 13, was invited to church by a friend as well. Her curiosity piqued, she started attending. God took the family by a storm. Today, the Fikes (Taylor, 21, and Adrianna, 18) are flourishing and actively involved members of the church, which is passionate about life change.

“My parents had gone to church before, but they had never really committed to going very often,” Taylor explained. “They started coming to church with me and my sister every week.”

In 2012, the family attended the Kalahari Youth Retreat, a winter respite held at a popular indoor water park in Sandusky, Ohio. Parents Brad and Paula went as chaperones, Taylor assisted Nick Cleveland, youth pastor at Grace, and Adrianna attended as a student.

Adrianna made a decision to dedicate her life to full-time ministry that week, and the family gathered to support her. “For the first time, we sat down as a family and prayed, and my dad prayed for us,” Taylor remembers. “I’ve heard my dad pray out loud twice, and both times were at Kalahari.”

It wasn’t until I came to [Grace Church] that I understood that Jesus died for me,” explained Taylor’s father, Brad. “Since we’ve been to Grace, it’s been a growing experience. Our kids have kind of become our role models, because they’ve pushed us into being more faithful in following Jesus.”

“I believe that Jesus will build his church and his church should be concerned about reaching the world,” said Cleveland.  “It’s a vision for our fellowship: disciples making disciples.”

“[Taylor’s] decision to go all in for Jesus changed his family,” he continued. “It’s a powerful story because it’s an entire family. But it is not an isolated story…this doesn’t happen in a place where people are unintentional about reaching lost people. — by MariJean Sanders (Andrea Skowronski also contributed to this story)