The Final Challenge: It’s Not About You 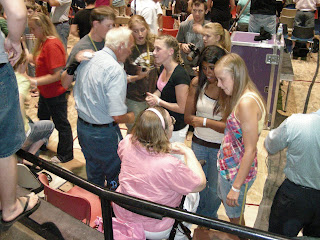 The final session of Momentum ended with a frank conversation led by Jeff Bogue, pastor of the North Campus of Grace Church in Akron, Ohio.

But it was not before a standing ovation greeted the home owners who were the recipients of work throughout the week on the Gulf coast projects, along with the volunteer administrators and managers. Young people left their seats to greet the homeowners with hugs as Steve Fee led music. (See photo, above right.)

Dominique and Jeremy, a brother and sister from Clinton, Md., sang a duet.

Reed Green Coliseum at the University of Southern Mississippi in Hattiesburg quickly became quiet as Jeff began to speak.

“If I was going to find a phrase that sums up what we’ve heard all week, it would be ‘it’s not about you,’” he said.

He wove the themes of each of the Momentum speakers through his talk as he told about how he had decided at an early age that he’d have to go through life on his own. Because of various circumstances, no one was there to protect him.

“Until I was in college, I went about impressing people,” he recalled. He told how during the summer after his second year in college, he realized that he must accept God or walk away from Him. At age 20, in spite of being raised in a Christian home, attending Christian schools, and walking the aisle numerous times, he accepted Christ.

God continued to work in his life. One night he found himself prostrate on the floor of his dorm laundry room floor, confessing his sin, and asking God to do something significant in his life.

“I know this week that you’ve been challenged,” he said. “You’ve made recommitments. You’ve been motivated. My question is: have you been broken?”

He encouraged the audience to consider their lives. “If you are governed by your pain, your habits, I’d encourage you to get up and come down and throw your face on the floor.”

The conference ended tonight with a late night worship and communion in Reed Green Coliseum. To see complete reports and photos of the week, click here. See “Pictures from Momentum 2007.”