The Forgiveness Continues at Momentum 2016

New comers and seasoned veterans have been running across Cedarville campus since the start of Momentum 2016 last night. They have been running from prayer meeting to youth group huddle, from the dining hall to the last available seat in their desired Power Trax session. And in between opening their Bibles and hearts, students engage in the numerous sports and activities offered every afternoon. Volleyball, frisbee, corn hole, and even a climbing wall. The chances for fellowship are abounding.

Clayton King returned this morning at Momentum, continuing the theme of YOURS with his sermon I AM 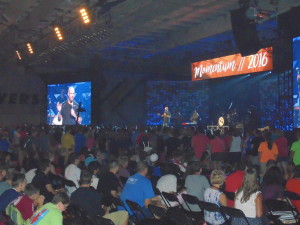 FORGIVEN. It was a reminder to some, but an introduction to many of God’s mercy onto us. King brought to live the attraction Jesus held toward sinners because he wasn’t intimidated by sin, even at the end of his life on the cross.

There were the two thieves hung on crosses besides Jesus; King referred to the one as a goat- stubborn, proud, and in need of elevating himself above everyone else, even Jesus. But the other was a sheep, humble and respective of Jesus. King broke down what took place for the thief; he became CONVICTED in his sin and CONFESSED it to Jesus. Then he CONVERTED to salvation by admitting that he had to go through Jesus to enter Heaven. And finally, he died with CONFIDENCE in Jesus Christ.

King ended his sermon with the invitation for students to accept the same grace. There was an eruption of rejoicing as a wave of boys and girls came forth, proclaiming their choice to follow God. Today, Momentum celebrates the additions into their family and getting to know them throughout the week. 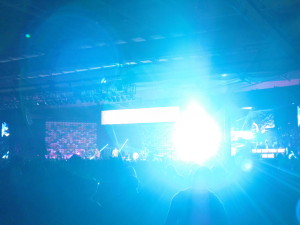