The Joy of Harvesting 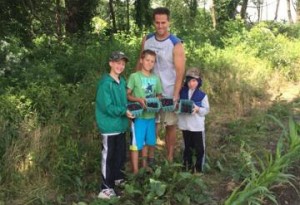 My family and I harvested three quarts of wild black raspberries recently. It was fun!

It was a treasure hunt! We would start picking berries in one patch, move some leaves aside and “bam” another patch would appear!! We were in different parts of the woods and every now and then someone would yell: “Holy smokes, look at the size of this patch” – and the rest of us would run to join in the pickin’ fun!

This is what Jesus had in mind in Matthew 9:37 when He said to His disciples, “The harvest is plentiful but the workers are few.” He may have been looking at a wheat field, but He could’ve just as easily been looking at woods full of raspberries. Here’s the point: Just like God caused the black raspberries to be ripe, He causes people all around us to be ripe unto salvation all the time!   But the workers are few indeed.

There are probably several reasons the workers are few, but one of them (maybe the biggest) is: Christians don’t want to get sweaty and cut up in order to get to the harvest.  Below is a picture of my arm after picking these raspberries. 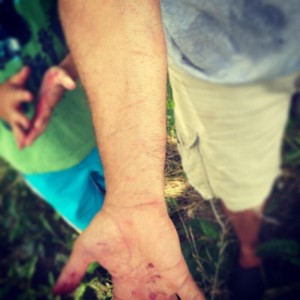 My arms were all cut up on the surface and I was dripping with sweat. It took hard work to get to those berries. This wasn’t the Wal-Mart produce section, this was the woods! We had to push past thorn bushes on every side; even the raspberry bush itself had thorns! In addition to the thorns there were mosquitoes, and in addition to the mosquitoes, it was 90 degrees and humid! But we got those berries!!

Oh, that we would go after lost souls that hard! If we would keep going into places where lost people live and push past the thorn bushes of sin and self-protection in their lives (risking offense) we would find souls ripe unto salvation! Sure, we’ll get some cuts, maybe even physical ones, but they’re just surface wounds because Jesus has our souls eternally protected!  If we would persevere through the biting words of lost people, (which are little more than mosquito bites) pressing through them until we find a small opening to insert the saving name of Jesus, we would find souls ripe unto salvation! Sure, we will get some welts and stains, but they’re just marks to remind us that we are on a treasure hunt with the King!  If we would press into the heat of lost people’s hurting lives — pushing past our own nerves — we would find lost souls ripe unto salvation! Sure, we would be dripping with sweat, maybe even physically, but that sweat actually starts to feel good once we harvest a soul for Jesus!

The joy of harvesting the blackberries — and eating the pie my wife made with them — far outweighed the cuts, mosquito bites and sweat.

And so it is with harvesting lost souls for Jesus. It brings so much joy! We will get to eat heaven’s feast with them. The fact that they are out of hell’s grip and now in heaven’s hand far outweighs all the cuts, bites and sweat it took to get there.

Will you recommit yourself with me to the joy of harvesting lost souls ripe for salvation? — by Nathan Wells

Nathan Wells is the executive director of SEEDNet,  an organization that plants churches  in apartment complexes and low-income communities. This first appeared on the SEEDNet Blog and is shared here with permission.