The Last Day of an Argentine Mission Trip 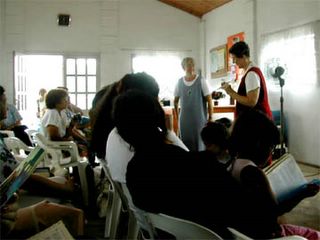 Today is the final day for the women’s GO team which has been ministering in Argentina. Excerpted here are some final comments by Miriam Pacheco (standing, at right), of Winona Lake Grace Brethren Church, who is one of the team’s leaders. Additional information and photos may be found at www.womenofcharis.net. (photo from womenofcharis.net)

Today we finally did some work–physical labor, that is. Several of us went to clean the apartment for Nate and Deb Dunlevy who arrive on Monday. The missionary team here is looking forward to their return. [Editors Note: The Dunlevys have been in Winona Lake, IN, this past semester, serving as Missionaries-in-Residence at Grace College and Seminary.]


After a little difficulty getting into the apartment, the crew found that cleaning was difficult with no water. A generous neighbor supplied a couple of buckets full and things went much better. The plumber is supposed to show up before the Dunlevys arrive, so hopefully they won’t need the neighbor’s buckets.

The rest of us went to the Berazategui church to paint. We swept down the walls, moved the furniture, climbed ladders, washed windows, brushed and rolled and made the place sparkle. It was a joy to see the finished product and know that the folks who worship there will be blessed.

Ana and her helpers made us a wonderful lunch of milanesa (beef thinly sliced, lightly breaded and fried), mashed potatoes, salad and ice cream. And we were ready to eat!

Then we traveled to another part of the city to help with an Hora Feliz (Happy Hour) that they have for children. It was out under the trees in a poorer neighborhood near where the Jose Marmol church meets. One of our gals was the clown and she went through the neighborhood and rounded up all the kids—50+–and we had a good time of singing, playing games and telling the children about how much Jesus loves them.

Then we walked about 15 blocks back to the church building to meet with the young people (here that means 18 or so to around 35, married & single) for some singing and pizza. The music was enjoyable as we sang familiar songs in both Spanish and English at the same time. It was a little taste of Heaven as our hearts joined in worship to the Lord.

And that takes us to the last day! Wow! Tomorrow we’ll have our final team meeting first and then head to the capital to sightsee, eat lunch and do some final shopping. Then to the airport to freshen up before we check in, then fly away home.

This team has been super and the energy has been really good. Just today several have said how they are beginning to feel tired, but it’s our last day! Praise the Lord for His sustaining power and for answers to the prayers of many people for our health and strength