The ‘Lost Winona Queen’ is Found 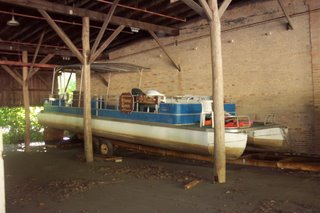 Who would ever have dreamed?

The July/August 2006 issue of FGBC World, which is about to arrive in homes and churches, contains some photos Pastor Jay Fretz sent us of Grace Brethren National Conference held in Winona Lake, Indiana, in August of 1958. One of those photos shows passengers discharging from the “Winona Queen” sightseeing boat, which no longer exists.

We were in western Pennsylvania this past weekend for the “Walking Like Jesus Did” day at the West Kittanning church. Arriving on Saturday, we were invited to a cookout at a campgrounds along the upper Allegheny River which is owned by 83-year-old Chuck Rupp, the father of Gladine Rupp McCall.

Somehow we got talking about “The Winona Queen” and Chuck asked, “Would you like to see it?”

So we meandered on the golf cart up the river about a quarter-mile, through wooded paths and gravel roads, past a number of campers and tenters, until we arrived at a spooky old abandoned brickyard surrounded by a locked chain-link fence.

Chuck unlocked the gate and we continued, driving through these massive old open-air buildings, past boats on trailers, parked recreational vehicles, and machinery and kilns dating back to the days of brickmaking at the factory.

Eventually, in a corner of one of the sheds, we came to the “Winona Queen.” It’s not the one in the paper—that was a previous boat which had a sternwheel and a large captain’s house, as I recall.

This was the “successor” Queen, a 34-passenger pontoon boat which apparently had been retired sometime in the 1960s or 1970s.

A decade or more ago, Rupp had purchased the boat from its storage place in Winona Lake, hauled it to Templeton, Pennsylvania, rebuilt/reconditioned the entire craft and used it for several seasons on the Allegheny, even pulling some waterskiers at times.

Because of its size and lack of maneuverability, however, it is now once again “retired” and sits on its trailer in the abandoned brickyard.

So…the “lost Queen” has been found.

What a strange coincidence!