The Next Chapter: Sacred Stories

Last week we heard the story of John Schumacher, former chaplain endorsing agent for the Grace Brethren Fellowship. This week, we hear from Mark Penfold, who is taking over the next chapter in the role long held by Schumacher. 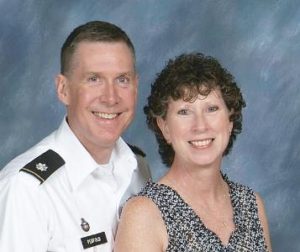 “I had the honor and privilege of serving as a pastor to some of the most dedicated and selfless people you could ever want to meet.”

Mark Penfold, who recently replaced John Schumacher as Chaplain Endorser for the Fellowship of Grace Brethren Churches, has quite a repertoire of stories from his 22 years serving as military chaplain for the US Army. He started his journey in 1986, during his last year at Grace Theological Seminary.

“As I looked toward graduation in spring 1987, I desired a ministry that was somewhat ‘cross cultural,’” he notes. The role of military chaplain fit the bill, so he took the plunge, completing his basic training in summer of 1987 and returning to Winona Lake, Ind., to become the associate pastor at the Winona Lake Grace Brethren Church serving under Pastor Charles Ashman. For the next eight years, he simultaneously served in the Army Reserve with units either in Fort Wayne, Ind., or Grissom Air Force Base south of Peru, Ind.

In January 1995, he was called to active duty, serving as the chaplain to an infantry battalion at Fort Drum, N.Y.  He was deployed to Kosovo during his time with an engineer battalion in Germany from 1998-2000. He then served two years as supervisory chaplain in a brigade combat team of about 3,000 soldiers, returning to the states 2002 to study ethics at Duke University. After graduation, he staying stateside for another four years as an ethics instructor. In 2007, he was deployed again, this time with an aviation brigade to Iraq.

The above timeline may already seem impressive enough, but Penfold wasn’t finished.

“Since [Iraq], all of my assignments have been stateside, supervising religious support on large Army posts — except for three years at the Army Chaplain School,” he says. His final assignment was as the Garrison Chaplain at Fort Jackson, S.C., where he advised the commanding general and served on his staff.

“Each year over 40,000 young men and women do their basic training there,” he notes. “I had oversight of 27 worship services each week, a million-dollar budget, and an extended staff of about 40 chaplains and chaplain assistants.”

He retired on April 30, 2017, after serving 22 years in the military, including two deployments and four and one-half years overseas. As Penfold moves into his new role as endorsing agent, he cherishes many of the accounts he heard and witnessed during his deployments, calling them “sacred stories.” Among them, Penfold recalls the honor of performing burials for World War II pilots who were shot down and listed as Missing in Action for decades.

“Seeing the relief, closure, and how it brings to their families brings a sense of healing to them is very powerful.”

He also recalls meeting Kosovars and Iraqis who were deeply appreciative of the American military because it meant the end of their political oppression:

“One Iraqi had been an enemy helicopter pilot during Desert Shield/Desert Storm. At one point he refused the orders of Saddam Hussein to strafe and kill Iraqis and spent years in a military jail until the U.S. liberated him. He valued freedom and we spoke of his desire to see Iraq someday become a democracy like ours.”

Penfold is looking forward to the new challenges to come, looks back on his time as chaplain fondly.

“I will cherish the memories of walking the line during late nights to check on Soldiers while they trained, or visiting those in guard towers protecting our base in Iraq. These families have made such deep sacrifices so that we can enjoy freedom as we do in America.”

[Connect:]
Click here to send a note of encouragement to the Mark Penfold. Click here to view the Passing of the Stole Ceremony, which was conducted July 26 during Access2017, the national conference of the Fellowship of Grace Brethren Churches.