The Other Wonder Woman 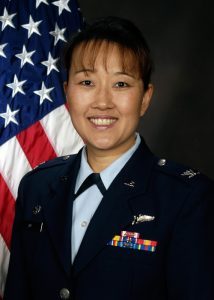 The following story was written by Kerith Ackley-Jelinek, publications director at Grace College. It was first published in the 2017 summer edition of Two Eight & Nine Magazine.

Lynda Vu (BS 88) is a marvel. Her life and accomplishments have taken her around the world many times in the service of her family and country. If we printed her full résumé in this magazine, it would be the magazine. But for context, there are highlights of Vu’s vitae that you need to know.

Vu is a colonel, the senior-most field-grade military rank. She’s a family medicine doctor, who has also earned her master’s in public health and is a board-certified aerospace medicine specialist. She’s the director of the Pentagon Flight Medicine Annex (a clinic at Andrews Air Force Base in Maryland). She’s served as chief of the medical staff and as a commander of a medical operations squadron and an aerospace medical squadron. She’s served stints in England, Greece, Nicaragua and Belize, to name a few. And in July she was deployed for six months to support a mission in the Middle East. At home, she’s the co-captain of a “large flight” as the mother of five children (who were born across several trans-Pacific time zones in Arizona, California, Hawaii and Japan).

But behind all of the education, titles, locations and experiences is a woman whose first and only mission is to know and love Jesus. “It’s an honor for me to share my story because it’s a testimony of what God has done in my life to impact the world and His Kingdom,” insists Col. (Dr.) Vu, before answering the first interview question I posed to her. “[Sharing my story] is nothing more than showing the wonderful hand of God at work in my life.”

Vu was born in the central highlands of Vietnam. She and her mother moved to the U.S. in 1972, after her mother married an American sailor. Vu was three years old when they moved to a small town in Massachusetts. Her parents weren’t believers, but they sent Vu to a Christian school, and she accepted Jesus as a five-year-old.

It was then that she took on her first mission. She began attending a church down the street— by herself. After Vu’s pastor came to their house for a visit, Vu’s mother also came to Christ, and the whole family began attending church.

Upon graduating from high school, Vu took a year off to attend a one-year Bible school to get grounded in the Word. While she was there, she heard about Grace College and its strong pre-med program. Vu’s mother had envisioned her becoming a doctor, but Vu wasn’t entirely convinced. However, by the time she arrived at Grace and sat under the tutelage of professors like Dr. Richard Jeffreys, Vu was committed to becoming a doctor. “I saw his passion for science and for life and for his students. He cared for his students so much and made sure they got what they needed to be successful in careers and the calling God had given them.”

After graduating from Grace, Vu took a year to pray over the calling she thought God had put on her life. “I felt pretty confident, but I wanted to make sure that was where the Lord wanted me to go.” Eventually, she applied to several medical schools and decided to attend Tufts University School of Medicine, where she obtained her medical doctorate in 1993. During her residency at the University of Texas Southwestern in Dallas, Vu signed up with the Air Force as a means to help offset the costs of medical school. “I really thought I would part ways with the military after I finished my four-year commitment,” she says, but when she and her husband prayed about her next step, it became clear she was supposed to stay.

Two decades later, Vu’s missions have included being on the teaching staff of the hospital on Travis Air Force Base (Calif.); providing medical support to operational units supporting military missions and overseeing all of the credentialed clinical providers at Yokata Air Base (Japan); serving as chief of medical staff at the Hickam Air Force Base clinic and flight surgeon at the Theater Patient Movement Requirements Center (Hawaii); training, equipping and resourcing units of over a hundred airmen to ensure they were able to execute their field missions (Alabama and England); and completing a residency in aerospace medicine at Wright-Patterson Air Force Base (Ohio).

Currently, Vu describes her latest mission as “[taking] care of the people who take care of the president.” As the director of the Pentagon Flight Medicine Annex, her clinic attends to senior military leaders and their families, and she gets to see patients almost every day.

With each new assignment, Vu embraces its unique opportunities to grow and strengthen her skills and leadership, but it doesn’t come without cost. Uprooting her family every few years, building a new community, getting acquainted with each new high stakes mission, and simply doing her job — which often means managing medical crises — requires sacrifice. “It’s not always easy,” she admits. But God provides for her at every turn. “In those crisis situations, He’s given me a calmness about being able to address the problem, and has given me a way to focus on the crisis. In the midst of critical incidents with severe injuries and in a time crunch, God helps me take it step by step by step.”

“There is a lot of stress in my job,” Vu says. “Every day I go to work and say, ‘Thank You [God] for Your strength and wisdom to make decisions. Show me the divine appointments you want me to meet today.’ Every day, I am amazed by the people He brings my way.” This is the reason Vu is who she is and does all she does. She sees God orchestrating every assignment, every new move and every interaction for the purpose of being able to impact others’ lives for Jesus. “Yes,” says Vu, “[my job assignments] are defined as military missions, but they are really God’s missions, aren’t they? And that’s true for all of us. — from grace.edu.