The Scars of a Father

As we celebrate Father’s Dayhere’s a reminder of a father’s love — not just an earthy father, but our Heavenly Father. This is written by Chaplain (Capt.) Pete Stone, who is with the 101st Airborne Division, stationed at Fort Campbell, Ky.

Scars tell stories. They are silent troubadours that remain permanently carved into one’s body, always ready to tell the history of their origins. Some people are even able to articulate their life’s journey simply by pointing to the scars they bear, both in the heart and on the body.

My father has a scar on his arm that he cherishes, because it tells a story he loves to remember, and points to one of the things he holds most dear to his heart—me, his son. It’s a scar that I’m not particularly proud of, because I’m the one who carelessly inflicted it. We went fishing and camping in the Quetico National Park of Canada, just north of Minnesota’s Boundary Waters. We paddled during the day, fishing as we went, and then camped at night when we cooked our day’s catch of Northern Pike. It’s an experience that is impossible to forget because of the pristine surroundings and the mesmerizing solitude that swallows you up in its majesty. One evening, my father prepared the iron skillet over the coals as he sat opposite me.  The oil was ready for the breaded filets. I picked up the filets and mindlessly tossed them into the cooking oil, splashing it onto my dad. The oil burned his forearm. He yelped in pain and grimaced from the burn that throbbed on his arm. “Uh, sorry dad,” I said, ashamed at my carelessness. “It’s okay, buddy. It’s not a bad burn.”

I never thought about it again until years later when my father and I were talking. I’m not sure what brought it up, but he rolled up his sleeve and pointed to the scar on his forearm. “Do you remember where that came from?” he asked. 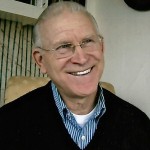 “This scar is from our Quetico fishing trip.” He looked at me and smiled. “Do you remember splashing me with the cooking oil?” I winced at the memory. He chuckled. “Sometimes when I’m alone and you come to mind, I will stop what I’m doing, roll up my sleeve and touch this scar.” He rubbed it as he spoke. “I love this scar, because it reminds me of you, and how special of a time I had with you in Canada; and it reminds me of how much I love you and how grateful I am to God that he has given you to me as your son.”

I made some comment like, “I’m glad my carelessness could contribute to something!” and we laughed together. But I never forgot that scar on my father’s arm. To this day, I’m grateful that it remains there, and that it provides for him an occasion to remember me and pray for me while I am in Afghanistan.

That scar silently tells a story to my father every day. And although I don’t wear the scar on my own body, I’m grateful for it, because that same scar tells me a story, too—a story much bigger than how it was created. Part of what makes it so special to me is that it was my own carelessness that resulted in that scar. To me, his scar is a reminder of how he has been there for me so often in times of my own personal distress—many times resulting from my own recklessness and error. There have been several occasions in my life where my father was deeply hurt as a result of my own personal failure. He stepped into my life and did his best to protect me and cover me from the consequences of my actions. He bore the shame and the hurt as much as I did, and without a doubt I know if there was anything he could have done to protect me from the pain I deserved to feel, he would have done it—even to his own detriment. The scar on my dad’s arm tells a story of the undying love with which I have been loved from the time of my conception. It tells of a love that has made me feel secure my whole life. It tells the story of a father who spent countless hours with his son in the back yard throwing football routes, and catching curve balls and blocking bad pitches with his body so we wouldn’t lose another ball in the weeds; and it tells of a father who never let his son win a game of one-on-one basketball, but who rejoiced with shouts of exultation when his son finally beat him for the first time. That scar tells of a father who never shouted once at his son in anger and who, when his son wrecked the car, towed the car home and without a hint of irritation went to work removing the front two fenders and hammered them out so that the car could be driven again the next day.  That scar tells of a father who stood publically with his son in the shame of character failure and who refused to believe anything but the best about him, and who persisted in remaining his son’s most avid supporter against all odds. Yes, I love that scar because although part of the scar’s story is my own carelessness, the bigger theme of the story is my father’s undying, unconditional love for me, his son.

His scar also reminds me of the affection my God has for me. Isaiah the prophet writes:

Can a woman forget her nursing child, that she should have no compassion on the son of her womb? Even these may forget, yet I will not forget you. Behold, I have engraved you on the palms of my hands… [1]

God understands scars. So he gave this vivid picture to Israel as a promise that she would never be abandoned. And he gave us Jesus to make good on that promise he gave Israel so many thousands of years ago—the promise that we could never earn the love he gave us so freely at such a high cost to himself. Our sins were the nails. God’s love was the hammer. Those scars that remain on Jesus’ body are the proof.

This Father’s Day, may we remember those scars, and remember the story they tell, that we would love the one who bears them for us.