The Silver Bullet: The Cable Bullet 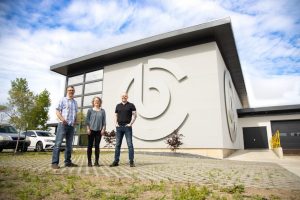 Dan Schlatter (BS 95) and Marla (Rueck BA 95 MAIM 03) Schlatter have strikingly similar stories of coming to Grace College. They both grew up on the mission field: Dan in Brazil and Marla in Austria; they both came to Grace for its strong education program; and they both needed a school that would accept their abundance of Bible credits. But for Dan, there was one more thing. He was also drawn to Grace, in part, for its liberal arts identity.

“I valued a broadened education that would allow me to understand the world through different disciplines. Some of my favorite classes at Grace were outside of my major: Appreciation of Fine Arts and Philosophy. These classes opened the world to me from a different perspective,” said Dan.

And it was this very approach to things — looking at old problems with a new perspective — that led to a silver bullet idea. Precisely, a cable bullet idea.

Dan and Marla met at Grace. Marla lived off campus with Dan’s older sister, Karen (Schlatter BS 94) Fontanilla, and Dan would make frequent visits to their apartment to do his laundry. In return, he would fix anything that needed to be repaired. Between Dan’s frequent laundry visits and their participation in Mu Kappa, a group for international students and missionary kids on campus, the two fell in love and were married in 1994. They graduated the next year. After a short stint teaching in Maui, Hawaii, the couple returned to Warsaw.

In 1998, Dan circled back to construction, a trade that he had practiced on and off since high school. While Marla had returned to Grace College to serve as a German professor and eventually the Study Abroad Coordinator, Dan started his own construction company, Inglenook, which he still owns today. The company found early success and grew as Dan became the only one in the area to obtain his Certified Professional Business Design (CPBD) certification. Over the years, Inglenook shifted its focus away from construction and more towards design, specializing in site-based design, integrating the house designs into the space around them.

Curious by nature, Dan was constantly trying new things at Inglenook, but in 2010, he was working on a modernist-style home that called for something new to him — cable railing. He found some railing online, but it was a mess to order, the installation was cumbersome, and the hardware was very industrial-looking with frayed wires and bulky tensioners. “The system was just very clunky,” Dan reflected back. “After that experience, I thought, ‘There’s got to be a better way to do this.’”

Dan went back to his garage and started tinkering. And while he tinkered, he began looking for new perspectives and asking the right questions. “How can I do this as simply as possible? How can I take the original concept and peel out all of the things that create unnecessary complexity and bog down what could be?” He spent hours upon hours ideating, conceptualizing, prototyping, tweaking and reiterating. He was insistent on designing a tensioner that was sleek in style, easy to install for the customer and cost-effective. He was intent on creating a single product that solved a host of problems.

He was looking for a silver bullet.

After years of iterations, Dan landed on a design that was promising. The tensioner, shaped like a bullet, could be used on both the left or right side, straight or sloped cable. The same piece could be installed in metal, wood or masonry. “At that time, I had a strong sense that what I had designed solved problems in the market,” said Dan. “I had a strong feeling that it would go.”

That was just the start of “Cable Button,” which would come to be known as “Cable Bullet.”

After working with machine shops and refining the process to get it where he wanted, Dan reached out to his friends and former Inglenook clients, Chris (BA 05) and Kristi Manduka (Bontrager CERT-TT 08), about coming on as partners. Chris was working in marketing and internet sales at the time, and Dan needed Chris’ skillset to create a web presence for this new start-up. Kristi jumped on board, too, working on the provisional patent and other legal work. Marla did the bookkeeping and Dan worked with manufacturers to ensure the product was made correctly. “It was a total team effort to get it up and going,” recalled Dan.

During the initial days, the Mandukas’ basement was for all intents and purposes a fulfillment and packaging plant. They hired their first part-time employee, Jenny Flowers (BS 08, CERT-TT 10, S 15, MACMHC 19), who was a trusted family friend. Chris would come home from his nine-to-five job and immediately start filling orders in the basement. He would deliver the packages to UPS in Columbia City on his way to work the next day. “That was never designed to last,” laughed Chris. Soon the company moved from the basement to the garage. But only six months later, the company outgrew the garage and began leasing space in a strip mall.

“When we outgrew the garage, it was starting to dawn on me that this was more than a side-hustle. I was late to the game there,” Chris confessed. Chris quit his job and focused all of his attention on the start-up that was showing great potential.

Once at the strip mall, they hired their first full-time employee, Phil Johnston, Jr. (BA 07), in 2019. Within the same year, they made several more hires to keep up with the company’s growth. Once again, it became apparent that they were in need of a larger space. Sales were increasing and the product demand was hard to fulfill.

“Everyone we hired in that first year had a shared understanding that Cable Bullet was a start-up and that their day-to-day work would change week to week,” said Chris. “A lot of the processes we would come up with had a shelf life of about three months.”

In 2019, Cable Bullet purchased a lot on Eastlake Drive in Winona Lake for Dan to design Cable Bullet’s new home. In the middle of construction, COVID-19 wreaked its havoc and created an ordering and manufacturing nightmare. The move-in date was pushed back several times. “At one point we even moved our shelves outside, and we were packaging orders in the parking lot,” laughed Marla. In September 2020, the team finally was able to move into its new home. Over the course of that year, 10 additional employees were hired.

With the exception of the early years, the company has consistently grown 100% year-over-year. 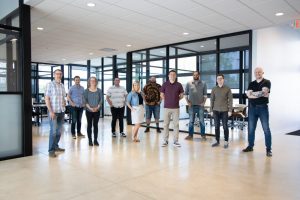 According to Dan, the odds that a provisional patent succeeds in the marketplace are 3,000:1.

Dan’s silver bullet idea in 2010 has defied the odds. But that isn’t all. The start-up company weathered a global pandemic, remained loyal to local and US manufacturing and most impressively, launched and executed the operation completely debt-free.

“I’m proud that we have been able to make choices that reflect our values instead of just profitability and short-term thinking. When you focus on what you should be doing, it makes for a strong company that is profitable,” said Dan.

Looking forward, the company is gearing up to make several more hires, expand their building and launch a new vertical cable product line — yet another product that came about through an intentional, holistic approach to design. As the company continues to grow and product development expands, Dan will continue to look at multiple perspectives and ask the right questions in order to find that silver bullet solution.

This fall, Grace College’s new Alpha Dining outdoor patio space will be framed by Cable Bullet’s clean, sleek cable railing. Cable Bullet has generously donated the posts, railing and installation. “It was an easy decision internally,” Chris said of the donation. “I have many fond memories of time spent at Alpha Dining. We are thrilled to be a part of it.”

Nearly half of Cable Bullet’s employees are Grace College alumni. (Learn more about Cable Bullet at www.cablebullet.com.) — from grace.edu