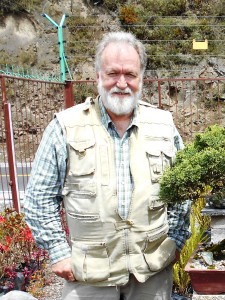 Steve Moore of Winona Lake Grace Brethren Church has lived with a lifelong stutter, but God has graciously used this difficulty to draw Moore closer to Christ.

The one thing that most people can do easily has never come easy for Steve Moore, a member of the Winona Lake, Ind., Grace Brethren Church (Bruce Barlow, lead pastor). Since childhood, he has dealt with stuttering.

“I’ve never in my life met or heard anyone with a stutter worse than mine was,” he says. “I’ll call mine a 9.5 just in case there’s someone with a worse one. It was every bit as bad as Prince Albert’s in [the movie] The King’s Speech.”

“A majority of the time, my stutter consisted of a block: I just could not initiate whatever it was I was going to say,” Steve describes his stuttering. “The word would be right there but I couldn’t get the first sound out. I would try to break past the block– in all kinds of ways. As a general rule, I would get past it after a certain amount of time-anywhere from five seconds to two to three minutes. But what often happened was that by the time I got past the block, I was out of air, so I could only say one syllable! Then, for all practical purposes, it was like I was starting a new word, and I would block again!”

Steve adds, “By the time I got out of high school, stuttering was a huge obstacle for me, from early in college, for a stretch of at least 25 years. I became more and more focused on the stutter and drawn into myself.” He learned to appreciate the friends who were willing to be patient and listen to him despite his blocks and struggles.

Around 1984 the manager where he worked saw Steve’s potential and promoted him to group leader, in spite of his stuttering. The job required him to give directions but the stuttering interfered. The manager suggested Steve write his instruction so he wouldn’t have to speak. This relieved some stress, though not all at once; there was a noticeable difference immediately in the level of pressure and stress, but it took an estimated six to eight years before a majority of the stress was gone, Steve notes.

Accepting suggestions from his dad and others, he began using the pen and paper everywhere he went.  “It helped so much with social interaction; it lowered my stress levels, which resulted in fluency. It has continued, all the way to now. But I still feel panic when I go out the door without a pen. I still carry a pen.” He laughs, looking down at the pen sticking out of his shirt pocket.

Steve still struggles some but his speech is greatly improved. “Two factors have worked together: the relief of stress from knowing I can resort to writing if I must, and learning some practicality,” he says. “I had to realize that I will probably never be able to say things with all the pleasing delivery I would like. But saying what needs to be said is more important, even if it comes out in a monotone or after a brief block.”

Steve, who has been involved with WLGBC for 40 years this past January, says his faith in God also plays an important part in dealing with stuttering.

“I know I belong to God and so it’s easier to put up the stutter. It’s easier to be patient and to think of other people and the impact my words could have on them. Everything God allows has a purpose. He shapes us into what he wants us to be. God’s intention for every believer is to be shaped into a living image of Jesus Christ. For example,when I see my parents in eternity, I know I’m going to recognize them, but I will also get to see the image of Jesus Christ completed in each of them.”

Moore says the key to his fluency was realizing that what he has to say is much more important than how he says it.

“I had to realize that I am more than just a stutter. God didn’t make a mistake. I wished I had learned so much earlier that there are more important things than my own embarrassment and discomfort; getting the job done matters much more.” – by Alisha Calhoon

[Connect:]
Click here to send a note of encouragement to Steve.