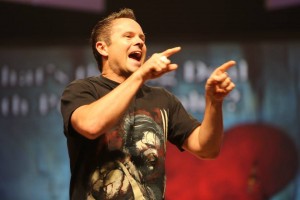 Sean McDowell addresses the conference on the difficulties of pornography. (Momentum Photo)

It was a thought-provoking ending to a busy Friday at Momentum 2013 as students, youth staff, and visitors saw a story of redemption and grace lived out before their eyes in the testimony of worship leader Steve Fee. His heart-wrenching story was followed by a fact-filled, biblical discussion of pornography led by Sean McDowell.

The conference is being held on the campus of Indiana Wesleyan University through Sunday morning.

Fee, who was interviewed by CE National director Ed Lewis, told of his journey following the discovery of a moral sin in his life. “It was God’s grace in my life that my sin was exposed,” said Fee, who returned to Momentum to lead worship following a three-year absence. He has taken a path of Biblical restoration and has returned to ministry.

McDowell, a highly regarded speaker and high school teacher who spoke about abortion at Momentum 2012, exposed three myths of pornography: it doesn’t affect me, I’ll quit later, and I’m not hurting anyone. He cited studies that show how the use of pornography impacts marriages negatively and creates physical changes in one’s brain.

“My point is to shake you up and to say this is a serious problem,” he stressed.

“But God can heal you,” he said, offering hope. “You cannot do this in your strength alone,” he added, encouraging the audience to lean on the body of Christ in overcoming addition to pornography.

Friday also saw a return of popular speaker and author, Francis Chan, to the Momentum stage for the morning session. He, too, followed the “I Am Second” theme as he encourage the audience to put Christ first.  “God has a plan for you, but it’s not about you,” @alyssabelkofer  quoted Chan in a Tweet. 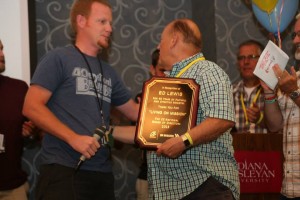 Ed Lewis receives an award from the CE National board for 40 years of faithful service to CE National. (Momentum Photo)

Prior to the evening session, CE National held its annual corporation meeting, during which time Ed Lewis was recognized for serving with the organization for 40 years. They also honored David Rice, of Lititz, Pa., and Dan O’Deens, Coatesville, Pa., for Reaching Neglected People, and Pastor Dan Cosentino, Kendallville, Ind., for Equipping Biblical Leadership.

At the Friday evening session, a video from Go2 Ministries told the story of Arnold Betoney and the Native New Life Church that he pastors in Albuquerque, N.M. CE National also announced the creation of the LIFE program (Low Income Financial Encouragement) which will provide scholarships to future Momentum conferences for students from impoverished areas. A donor has agreed to match gifts up to $25,000 in order to provide the scholarships.

The speaking portion of the sessions is being live-streamed over the Internet and may be accessed at buildmomentum.org.

See videos recorded at the conference.