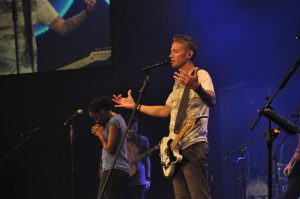 Access2018, the national conference of the Charis Fellowship (Fellowship of Grace Brethren Churches) ended Thursday afternoon, July 26, with a lively business meeting which saw the addition of three new churches to the fellowship and the adoption of three position statements to be added to the fourth cluster of the Commitment to Common Identity.

Churches added to the Fellowship are:

Phil Sparling, the pastor of Grace Community Church, Auburn, Calif., was elected executive director for a three-year-term beginning after Access2109, which will be held at his church. In addition, Tom Avey and Doug Courter were ratified as secretary and treasurer, respectively, of the Fellowship. 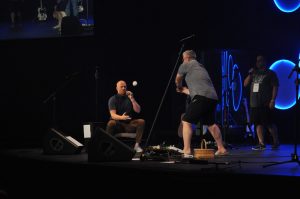 Mark Artrip and Dave Pacheco lightened up sessions with fun activities, such as this challenge between church staff members as to who could hit a ball the furthest.

Four position statements were presented for consideration, including statements on Affirmation of Life, Ordinances, Marriage and Sexuality, and Eldership. Dave Guiles, who was instrumental in leading the development of the Commitment to Common Identity for the Charis Alliance, a network of international congregations, took time to provide historical background and the importance of developing statements to be included in the fourth cluster of the Commitment to Common Identity, which was adopted by the Fellowship in 2016 as the official identity statement.

The Affirmation of Life statement says that “We affirm that human life is sacred and worthy of respect. From the moment of conception, human life is precious and deserves protection from murder, suicide, abortion, and mercy killing. We affirm that those who are terminally ill deserve appropriate medical care, including palliative care and pain management, but medically-assisted suicide is not a moral or biblical option.”

The Marriage and Sexuality statement states, “We believe God created marriage to be a public covenant relationship, normally consummated by the union of sexual intercourse, between two consenting people, one man and one woman. This covenant is to endure as long as both are living for the purposes of mutual care, mutual joy, mutual edification, procreation, and symbolizing the covenant relationship between Christ and His church to all generations. We affirm that all sexual relations of any kind that occur outside the boundaries of marriage are immoral and contradict God’s design for humanity.”

The Eldership statement reads, “We affirm that men and women are both created in the image of God, are equal in value and personhood and are designed to be inter-dependent in life and ministry within the local church. We believe that the leadership position in our local churches corresponding to the biblical role of elder/overseer/pastor is reserved for men who meet biblical qualifications.“

A position statement on Ordinances was tabled for further discussion.

During the business meeting, Sandy Barrett was honored for 20 years of service to the Fellowship. She retires as operations coordinator after conference.

Resolutions presented by the Social Concerns committee were presented. They addressed issues on civility in government and in professional and personal life, immigration, protection of human life, definition of Marriage, gender identity, religious freedom, and law enforcement in society.

Clancy Cruise, executive director of the Fellowship presided over the meeting, which came at the end of two and one-half days of fellowship, outstanding speakers, and opportunities to connect in various subject-matter cohorts. The event was again hosted by Grace Community Church, Fremont, Ohio (Kevin Pinkerton, pastor), which hosted the national conference in 2017.

The conference began unofficially on Monday as about 40 gathered on the shores of Lake Erie to take a ferry to Put-in-Bay for dinner. Keith Minier, pastor at Grace Fellowship, Pickerington, Ohio, led the conference planning team. 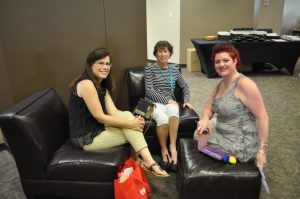 Wives of Charis Fellowship chaplains catch up between sessions.

At the opening Celebration on Tuesday, Tony Livigni, campus pastor of Grace Church, Medina, Ohio, talked about “Reflections on Handling Early Success While Wanting Lasting Fruit. (Click here to watch the video of the morning session.) Tuesday cohorts provided opportunities for people to explore topics like church administration, counseling, church multiplication, and leadership. Breakfast was hosted by Assist Church Expansion, who presented their church-planting ministry. At lunch, Inspire – Charis Pastors Network (formerly Association of Grace Brethren Ministers) sponsored a lunch for pastors and wives. Phil Sparling, pastor of Grace Community Church, Auburn, Calif., shared words of encouragement. At dinner, Grace College and Seminary celebrated God’s goodness with an update on programs at the school and the annual corporation meeting for the organization.

Dan Allan shared at the Tuesday evening celebration. He spoke on “Leaving A Legacy and Finishing Strong.” A “Late Night” session following the celebration found conference attendees in the church’s student center enjoying ice cream and bounce houses. (Click here to view the second session of the conference.)

Wednesday began with breakfast hosted by GraceConnect and BMH Books, during which time their corporation meeting was also held. Joel Trainer took to the platform during the morning Celebration, looking at “Reflections from the Beginning of the Path.” (Click here to watch Wednesday morning’s session.)

Wednesday cohorts included topics such as communications, international partnerships, women’s ministries, and raising kids in a ministry home. At lunch, Encompass World Partners celebrated 100 years of ministry in the Central African Republic with an African menu and stories of the first missionaries who embarked to the field in 1918. At dinner, the conference celebrated the Eagle Commission and the military chaplains during the Grace Brethren Investment Foundation dinner and annual meeting. 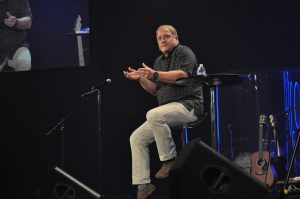 At the morning Celebration, Phil Sparling spoke on “Reflections on Keeping the Bible Central to a Ministry.” (Click here to view the final session of Access2018.)

See photos from the week at facebook.com/graceconnectus.