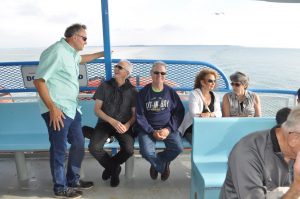 The national conference of the Charis Fellowship (Fellowship of Grace Brethren Churches) kicked o on Monday night, July 23, with a relaxing ferry ride across Lake Erie to dinner at the Boardwalk Restaurant in Put-in-Bay, Ohio.

Access2018, the national conference of the Charis Fellowship (Fellowship of Grace Brethren Churches) ended Thursday afternoon, July 26, 2018, with a lively business meeting which saw the addition of three new churches to the fellowship and the adoption of three position statements to be added to the fourth cluster of the Commitment to Common Identity.

Churches added to the Fellowship are:

Phil Sparling, the pastor of Grace Community Church, Auburn, Calif., was elected executive director for a three-year term beginning after Access2109 (national conference), which will be held at his church. In addition, Tom Avey and Doug Courter were ratified as secretary and treasurer, respectively, of the Fellowship. 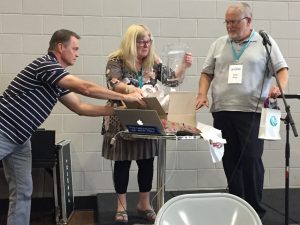 Sandy Barrett was recognized for her service to the Fellowship.

Four position statements were recommended for consideration, including statements on A rmation of Life, Ordinances, Marriage and Sexuality, and Eldership. These are to be included in the fourth cluster of the Commitment to Common Identity, which was adopted by the Fellowship in 2016 as the offcial identity statement.

The statements on Affirmation of Life, Marriage and Sexuality, and Eldership were approved. A position statement on Ordinances was tabled for further discussion. (See charisfellowship.us/page/126 for complete information on the vote.)

Resolutions presented by the Social Concerns committee were presented. They addressed issues on civility in government and in professional and personal life, immigration, protection of human life, definition of Marriage, gender identity, religious freedom, and law enforcement in society. (See charisfellowship.us/page/resolutions2018 for a complete listing of the resolutions.)

During the business meeting, Sandy Barrett was honored for 20 years of service to the Fellowship. She retired as operations coordinator following the conference.

Clancy Cruise, executive director of the Fellowship presided over the meeting, which came at the end of two and one-half days of fellowship, outstanding speakers, and opportunities to connect in various subject-matter cohorts.

The event was again hosted by Grace Community Church, Fremont, Ohio (Kevin Pinkerton, pastor), which hosted the national conference in 2017.

This article originally appeared in the Fall 2018 issue of GraceConnect magazine. Click here to read the complete issue online.