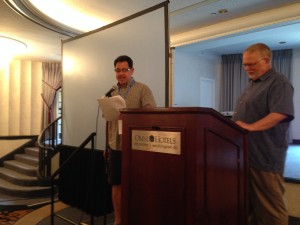 Michael Saldivar, left, chair of the membership committee for the Fellowship Council, welcomes new churches and cooperating ministries to the “family.” At right is Tom Avey, FGBC coordinator.

Three new congregations officially linked with the Fellowship of Grace Brethren Churches on Monday, July 21, as the annual business meeting was held during FellowShift, the national conference of the Fellowship.

“We’ve got a great start on the goals, but we’re not there yet,” said Bartley Sawatsky, executive director of the Fellowship of Grace Brethren Churches as he reported on the progress of the goals he had outlined in 2013 in Atlanta.

Just completing the first year of a three-year term as executive director, he noted lessons learned as he spent the first seven months of the past year learning more about the Fellowship, which he has term “a starfish,” a nod to the book, The Starfish and the Spider: The Unstoppable Power of Leaderless Organizations, by Brafman and Beckstrom.

His goals last year centered around the phrase “regroup, rejuvenate, and roll,” with a focus on revitalizing the network of Grace Brethren congregations. Among the goals realized: communicating a new direction, maintaining the momentum of the regional Focus Retreats, creating a buzz-generating conference, and the ongoing prayer initiative, which has been led this past year by Tom Julien. Other goals, like developing youthful branding or setting church planting goals with more than five church-planting organizations need additional time or he has realized are unrealistic.

For 2014-2014, he stressed several goals, including: finish the Identity Initiative, focus on activities that rally young leaders, host another strong national conference, start making a succession plan for the next executive director, and redefine “roll,” the area of last year’s goals that he found most difficult to meet. In addition, he plans to work with churches or organizations on how to develop young leaders and church planters, in order to plant more churches.

Images from the week may be viewed at GraceConnect’s Facebook page. (Be sure to tag yourself if you are in any of the photos.)

Next year’s Vision Conference, Flinch, will be held July 23-26 near New York City.