“Our Sunday, August 13 commissioning service for Pastor Joel and Morgan Trainer with Three Creeks Church was so special!” reported Sean. “[It] certainly a marked moment for our Encounter Church people. In the eight and half years of our existence, it’s the second time we’ve had the privilege of doing a service like that. (The first time was for Pastor Mark and Kristin Artrip of Movement Church back in December 2012.) Movement and Encounter have collaborated over the past 12 months while Joel did a residency with our two churches. We have enjoyed mentoring, coaching as well as gifting people and 5 percent of our tithes and offerings to help send the Three Creeks team well. “

Movement Church held a commissioning service for the Trainers and the Three Creeks team on Sunday, August 27. Mark Artrip reports: “Joel was involved in our ministry on every level. We apprenticed him first in our church so he could make roots and learn our DNA and so that people would feel drawn to his vision and Three Creeks so that they could gather a launch team. He led our volunteer gathering on Sunday, he led a Movement (small) group that he multiplied mid year, he taught our leadership gathering book study, and he regularly taught on Sundays with us and Encounter Church. We designed the best experience we could to help him learn from where we are as a portable church to turn around and do the same.” (Both Encounter and Movement churches consider themselves “portable,” as they meet in rented facilities and must set up each weekend for services.)
Joel and Morgan begin his launch team meetings this September with a plan to begin church services in February of 2018. About 65 people are already committed to be involved with the new congregation.
For the leaders and congregations of Encounter and Movement churches, it’s one more step toward the goal of reaching people for Christ. “Our dream is to continue being churches that plant churches that plant churches,” said Sean. 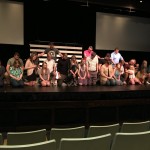 The Trainers and the team who will join them in Gahanna, Ohio, were commissioned by Encounter Church, one of their sending congregations. 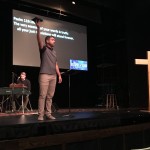 Joel Trainer, with his wife, Morgan, will be planting Three Creeks Church in Gahanna, Ohio. 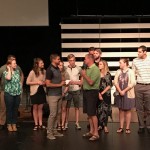 Sean Spoelstra, of Encounter Church, presents a check to Joel Trainer on behalf of the church. 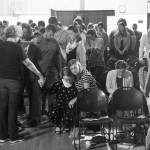 At Movement Church, the congregation gathered to pray for the team who will be planting Three Creeks Church.