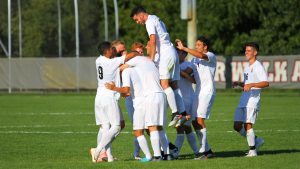 A trio of Grace College men’s soccer players were given All-American recognition at the end of the season.

Ivan Santagiuliana joined Talamas as a Third Team NCCAA All-American, and Gabriel Osti was honored to the CoSIDA Academic All-America® Second Team. Osti boasted a 3.95 GPA as a finance major.

Talamas led Grace’s attack all season. The junior forward, who was earlier honored as the Crossroads League Offensive Player of the Year, scored 15 goals to go along with five assists. He was also named to the CoSIDA Academic All-District Team.

Santagiuliana finished third on the team with five goals, despite playing exclusively as a central defender. He helped Grace record six shutouts on defense.

The Lancers enjoyed a strong season under head coach Arron Patrick. Grace was the national runner-up at the NCCAA National Championships, reaching the finals for the first time since 1976.