Thy Will Be Done 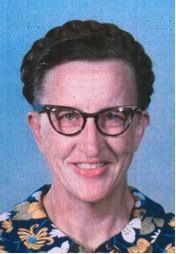 As we celebrate 75 years of telling the stories of the people and churches of the Fellowship of Grace Brethren Churches, every so often, we will share an article from the Brethren Missionary Herald archives. In April 1965, missionary to Africa, Rosella Cochran, shared her story of how God worked in her life, though much differently then she expected! Enjoy this throwback to another era in the history of the Grace Brethren movement.

[Miss] Ruth Snyder, patient in room 201, was writing in her diary. I, the nurse, was sitting nearby.

“What were we doing a year ago today?” I asked Ruth. I knew that at that time we were at the Bible Center in Africa and that my furlough time was drawing near.

The events of the year came into review in my mind. In what strange ways the Lord works in the lives of His servants!

I had a desire to stay in Africa, to learn to operate the new I.B.M. typewriter, to continue in the work of the Trompette magazine and other literature, to continue the oversight of the dispensaries. However, furlough time came and I was whisked away to the U.S.A.

From the first days in the U.S. I all but counted the days until my return to Africa. Early in December the conference of Brethren churches in Africa was to be held. But conference time came and went, and due to circumstances beyond my control I was still in the U.S.

The last of December is missionary conference time in Africa. “Surely I must be back by then!” But the conference date came and went, and I was still in the U.S.

February 3 was the date set for the literature distribution conference sponsored by Evangelical Literature Overseas. How I longed to be in Bangui for the event! However, early in January I learned that I would not be there.

On January 10 I stopped making plans according to the way I thought they should be. He has directed since then, not in a way I would have planned, nor chosen, nor even agreed to before; but I said “They will be done,” and I meant it.

For three weeks following my surrender to God’s will I was in Portland, Indiana. There I helped my brother with his newly-established and struggling Christian bookstore. As I walked to and from the bookstore, I passed by the Jay County hospital. For some time I had had a desire springing up within to do a little nursing, that my R.N. might not go completely stale. So I purchased a uniform and let it be known that I would soon make myself available – probably for private duty.

One day I came home from the bookstore to find the nurse’s cap I had ordered in the mail. I could start work.

Brother Barnard called me that very night of Friday, January 29, to tell me that Ruth Snyder was in the hospital at Fort Wayne. She had been flown home for medical care. Would I render my professional services if necessary? Ruth and I have been friends for years and co-laborers in Africa since 1955.

Now, for a month I have been with Ruth, attending her through two major operations.

During difficult days in the hospital Ruth and I read together Victorious Praying, by Alan Redpath. He draws attention to Romans 8:26 and 27: “We know not what we should pray for as we ought: but the Spirit itself maketh intercession for us with groanings which cannot be uttered.”

Ruth and I have both done editing in Africa. We receive materials written by Africans, and it is our duty to correct the errors in grammar and spelling and put it together so it says something. It occurred to me that the Holy Spirit must have to do a lot of editing of our prayers. But, praise His name, He makes intercession for us “according to the will of God.”

“Thy will be done.” The events of the past months have been much different from anything Ruth or I would have planned, but we are confident that our Master makes no mistakes. We can but exclaim, as expressed by Dr. Redpath: “Oh, the joy of submitting, down to the last detail of our experience, to the good and perfect and acceptable will of God!” —Rosella Cochran served as a missionary nurse from 1954-1990. She died in August of 2011. (Read the complete story and browse the rest of the 1965 archives by clicking here. You’ll also find Miss Snyder’s side of the story.)