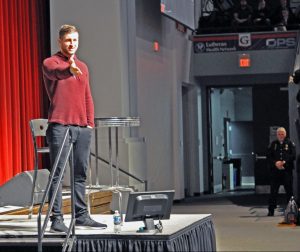 Tim Tebow, two-time national champion, first-round NFL draft pick, and Heisman trophy winner, brought a message of inspiration and hope to a capacity audience at the Manahan Orthopaedic Capital Center on the campus of Grace College on Friday morning. A former NFL player, he is now an outfielder for the New York Mets.

He spent about 45 minutes of the regularly-scheduled chapel service to share his story — from how he decided to play football for Urban Meyer at the University of Florida, to the importance of placing your trust in Jesus.

Woven throughout his message was the fact that you matter to God.

He encouraged the audience to serve others in order to have an impact and stressed that a perfect example of that is found in Jesus Christ.

“He humbled himself,” he said. “He came and rescued us,” he added, noting “What Jesus did on the cross counted for me.”

He encouraged the audience to make a decision to follow Jesus, even leading them in a prayer.

“It’s not the prayer that saves you,” he stressed. “It’s what you believe in your heart.”