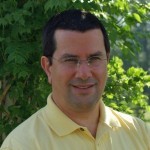 Word was received this evening that Todd Scoles, associate pastor at the Marysville, Ohio, Grace Brethren Church, board president of Brethren Missionary Herald Co. and member of the Grace College and Seminary board, was hit and killed this afternoon as he rode his bicycle.

Todd Scoles is associate pastor at the Grace Brethren Church of Marysville, Ohio (Clancy Cruise, pastor). He holds an undergraduate degree in English Literature from The Ohio State University, an M.Div. degree from Grace Theological Seminary, and a D.Min. from Ashland Theological Seminary. Scoles is chairman of the board of the Brethren Missionary Herald Company. He and his wife, Linda, have three children.

More details will be posted as they become available. Scoles led the BMH board meetings this past Thursday and Friday in Winona Lake, Indiana.

UPDATE: From NBC4 news in Columbus:

A 48-year-old man was pronounced dead in Union County after he was found lying next to his bicycle off the side of a roadway.

The man was identified as Todd S. Scoles of Marysville.

Troopers from the Marysville Post of the highway patrol found Scoles after they responded to a 911 call reporting seeing Scoles beside the Middleburg-Plain Road near State Route 161.

The patrol would not say if a hit-and-run is suspected.

The agency’s Crash Reconstruction Unit was called to the scene to investigate.