Todd Scoles Remembered by BMH Board 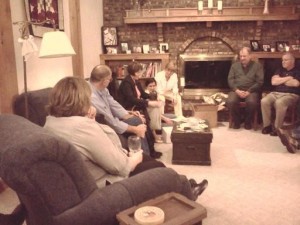 Linda Scoles (seated, center, dark sweater) received a “Divine Servant” statue from the Brethren Missionary Herald board in honor of her late husband, Todd, who was BMH board president (Daron Butler photo)

The board of the Brethren Missionary Herald Co., a national organization affiliated with the Fellowship of Grace Brethren Churches, met this past Thursday and Friday in Winona Lake, Indiana, for their annual spring board meeting.

A special part of the meeting included an informal dinner for board members, employees and spouses at the home of BMH executive director Liz Cutler Gates, at which Linda Scoles (seated, center, dark sweater) and her daughter Rachel were presented with a 1/3 size bronzed sculpture of “The Divine Servant” (Jesus washing Peter’s feet) in honor of their husband and father the late Todd Scoles.

Todd Scoles, who was serving as BMH board president, convened the October, 2010 meeting of the board and two days later died unexpectedly while riding his bicycle. Board members and BMH employees shared memories of Todd and his leadership and supported his family with love and prayers as the evening concluded.

GBIM missionary Barb Wooler, who had just been named vice-president of the board at the October meeting, moved into the president’s position and led this March meeting of the board. Agenda items, in addition to financial and publishing reports, included significant discussion about BMH’s role in the CHARIS movement, plans for the upcoming summer national conference of the FGBC, and a phone consultation with the new moderator of the FGBC, Pastor Robert Fetterhoff of Wooster, Ohio.