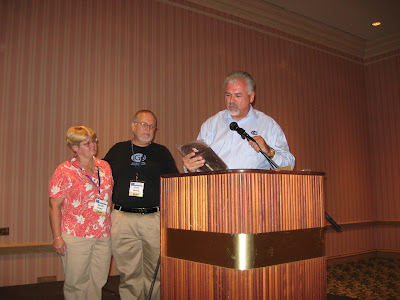 Fellowship Coordinator Tom Avey (center) was awarded the Excellence in Ministry award Tuesday morning by the Association of Grace Brethren Ministers. Sandi Avey, Tom’s wife, is at left and Tim Boal made the presentation. Here is the citation read as the award was presented:

It is my deep privilege to have been asked by the AGBM leadership to present our award winner this year for Excellence in Ministry. I know you will agree with me when we call his name in just a moment that his entire ministry has been marked by a quality of service for the Lord Jesus that can truly be categorized as excellent.

This quality of work has been provided to the FGBC churches he has served for more than 30 years, beginning with a youth and worship role in 1977 and leading to his becoming a licensed elder in 1980. From there he has been engaged in ministry work as an associate pastor, a solo pastor and administrative pastor and servant to the churches.

The only other relationship of a longer standing nature than his service to the FGBC is his marriage, and Lord willing he will celebrate 35 years of wedded bliss to his bride this fall. He has four children and six grandchildren, all loyal followers of Jesus, using their gifts and talents for the Lord all over America. But don’t take that to mean he is old, after all he was only a baby when he got married, and he is still very young at heart and as relevant to the younger pastors he serves as he is wise as a colleague to pastors his own age and older, all of whom seek him out for his insight and guidance.

Through the years of his service for our Lord, God’s people have noticed, along with his other many gifts and skills, four significant areas of ministry impact that have characterized his work.

First is the gifted nature of his administrative skills which have brought to each organization he has served significant progress and strategic thinking. These in turn have helped to advance the cause of that pastor, church, or organization far beyond what might otherwise have occurred.

As one pastor with whom he served noted, “He moved his family to our church in early 1987. He came not as a pastor on the staff, but as my personal assistant. Before the year was up, I lost him to everybody else in the church. He became the de-facto treasurer and church administrator. During the years when we entered a fund-raising and facility construction period, he was invaluable. We eventually tried to move him to a pastoral role, but it was impossible. His influence was everywhere.”

Of course, we know the nature of this gift has been deposited by the Holy Spirit into his life and the resultant fruit of his faithfulness to use this gift has brought great glory to God and the advancement of the mission of the Lord Jesus Christ. I do not believe it is unfair to think that when pastors or FGBC leaders frame in their mind the type of person they need on staff to bring organization, structure, and support to their ministry they model their ideal candidate after our recipient today.

Second, our winner has a unique ability to network people together around the common themes of ministry. He is what Malcolm Gladwell in his book The Tipping Point calls a connector. Connectors — the kinds of people who know everyone and possess special gifts for bringing the world together. Connectors are defined by having many acquaintances, a sign of social power, and embody the maxim “it’s not what you know but who you know.” Even though he knows a lot, he knows the Lord best and the Lord’s servants everywhere in the FGBC and beyond.

A third ministry aspect that has been noted in our award winner is his attitude of humility. This attitude of servant leadership has allowed him to play a support role to other pastors like his mentors Ed Jackson, R. Paul Miller, Jerry Young, and every moderator who has worked with him through the years. His earnest and heartfelt desire is to see those with whom he works succeed in their endeavors for the Lord.

Finally, as you know is true for any married man who is fruitful in ministry, such fruitfulness cannot happen without a faithful and supportive wife of the first degree. So it is that our recipient has been provided a godly helper in his wife Sandi who has shared the ministry’s ups and downs and the joys and wonders of a shared life together for 34 years.

In the last few years we have prayed earnestly for him as he and his family have undergone many issues including his health and the health and well-being of his children and grandchildren who have persevered through assorted trials and difficulties. It has been my privilege to watch him suffer with a meek spirit and it has been a personal blessing to see his tender heart and deep devotion to Jesus during these times of trial. A man of God is normally made in the pressure cooker and “man of God” is a term that accurately defines his life and ministry.

He has been aided in his ministry by a faithful support staff in his office as both Sandy Barrett and Charles Ashman have added to the excellence in ministry offered by our brother.

Raised on Long Island, New York, influenced and shaped by his parents, he was recruited in 1996 to move to Winona Lake, Indiana, and become the assistant to the FGBC moderator, and then in 1998 he was named FGBC Fellowship Coordinator. As his former boss says, “He is one of the most talented guys I ever met in my life. He was a great help to us in Lititz, a gift from God at precisely the right time. I am proud to count him and Sandi among my friends.”

I too am proud to count him a friend and deeply honored to present him to this esteemed group today, our Excellence in Ministry award winner for 2008, Rev. Tom Avey.