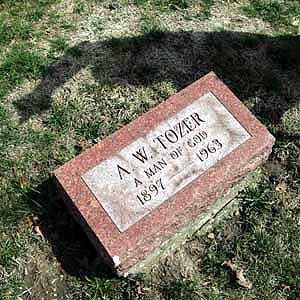 This feature story on the grave of A.W. Tozer appears in today’s Akron (OH) Beacon-Journal newspaper, and quotes Jonathan Carey, pastor of the Ellet Grace Brethren Church. One of this blogger’s favorite memories was a weekend Christian journalism conference at Grace College and Seminary-sponsored by the Brethren Missionary Herald Co.-featuring guest speaker A.W. Tozer. As best we can remember, that was in about 1962, one year before the great Christian journalist’s death.

Tozer’s publishing house, Christian Publications Inc., has recently gone out of business and the Tozer intellectual properties will be preserved and perpetuated under the corporate umbrella of Zur, Inc., with the publishing house being WingSpread, of Camp Hill, Pennsylvania. (Beacon-Journal photo)

They pray at the grave of a man they never met. Out-of-town visitors make a special pilgrimage to Ellet Cemetery to honor a 20th-century prophet whose writings inspire them.

Evangelical author Aiden Wilson Tozer, pastor of a Chicago church for more than 30 years, wrote nearly 40 books about faith. Two of his titles — The Pursuit of God (1948) and The Knowledge of the Holy (1961) — are considered classics in evangelical Protestant theology.

Many Akron residents may not know that the minister is buried in Ellet, but the word has spread beyond Summit County. Almost every month, small groups of Tozer’s admirers wander into the historic cemetery behind North Springfield Presbyterian Church at Canton Road and Albrecht Avenue.

“There’s probably a hundred people, I’d say, that have been there to see that grave since about a year ago,” said Robert Dishman, the church’s custodian for 33 years.

At the cemetery, Dishman digs graves, mows grass, trims trees and handles other duties. When he works outside, he occasionally runs into visitors.

“I’ll see people up here walking around, and I’ll ask if I can help them,” he said.

Quite often, they’re looking for Tozer. He guides them to the back corner of the cemetery — Tier 23, Lot 57, Grave 4 — to a rose-colored granite marker with a simple inscription:

“The people that come here are ardent readers of his books,” said Jerry Schrop, Ellet Cemetery superintendent. “They really respect his theology.”
Some bring flowers. Some take pictures.

“A few of them have stayed by his grave for several hours and prayed,” Schrop said. Nearly a century ago, Tozer found his calling in Akron.

He was born April 21, 1897, in La Jose, Pa., and moved with his family to the Rubber City in 1912. Jacob and Prudence Tozer and their six children — Zene, Essie, Aiden, Mildred, Margaret and Hugh — lived in a crowded house at 108 Roger Ave. in Middlebury.

Aiden enrolled briefly at Akron High School but left at age 15 to support his family. He found jobs in the rubber shops at Goodrich, Goodyear and Mohawk.

According to biographer James L. Snyder, the defining moment of Tozer’s life arrived in 1915 as he walked home from work one day. A crowd had gathered around a street preacher, and Tozer stopped to listen.

“If you don’t know how to be saved, just call on God, saying, `God, be merciful to me, a sinner,’ and God will hear you,” the old preacher said.

The words resonated with the teen. When he got home, he climbed to the attic and prayed. In his mind, a light clicked on.

He discovered something else at church, too: Ada Pfautz, a 16-year-old parishioner. He asked to walk her home to 1458 Malasia Road in Goodyear Heights.

The afternoon stroll led to a courtship, and the courtship led to marriage April 26, 1918. By then, Tozer knew he wanted to be a full-time preacher.

Aiden and Ada Tozer joined the Christian and Missionary Alliance church on Locust Street. Tozer worked to save souls on Akron street corners and traveled with his brother-in-law to preach in West Virginia.

The young evangelist left Akron in 1919 to serve as pastor of Alliance Church in Nutter Fort, W.Va. Over the next decade, he led churches in Morgantown, W.Va., Toledo and Indianapolis — each congregation a little bigger than the previous.

His immediate family kept growing, too. The Tozers welcomed six sons and a daughter. By the time Tozer arrived at Chicago’s Southside Alliance Church in 1928, he was one of the most influential U.S. evangelists.

“A.W. Tozer had the gift of taking a spiritual truth and holding it up to the light so that, like a diamond, every facet was seen and admired,” Chicago author Warren Wiersbe once noted.

In 1943, the evangelist wrote his first book, Wingspread, a biography of Christian and Missionary Alliance founder Albert Benjamin Simpson. He drafted his most famous work, The Pursuit of God (1948), during an overnight train trip to Texas.

“I think a new world will arise out of the religious mists when we approach our Bible with the idea it is not only a book which was once spoken, but a book which is now speaking,” he writes in the best-seller.

“Secularism, materialism, and the intrusive presence of things have put out the light in our souls and turned us into a generation of zombies,” Tozer warns in The Knowledge of the Holy (1961).

“We cover our deep ignorance with words, but we are ashamed to wonder, we are afraid to whisper `mystery.’ ”

Tozer retired from the Chicago church in 1959 and accepted a pastorship at the Avenue Road Church in Toronto, Ontario. His final years were spent in Canada.

The author was buried in Chicago, but his widow had second thoughts. In 1976, she had the remains disinterred and moved to Ellet Cemetery in Akron, the town where they met.

Robert Dishman, custodian at North Springfield Presbyterian Church, dug both graves. Within the last two years, religious pilgrims began to ask about Tozer at the cemetery.

“I had never heard of him,” said the Rev. Janet Lowery, church pastor since 1999. Tozer’s writings aren’t as well known in the Presbyterian Church, but she set out to learn more.

The grave’s location was disclosed in James L. Snyder’s 1991 biography In Pursuit of God: The Life of A.W. Tozer. The Ellet inquiries multiplied after excerpts appeared on the Internet.

Some visitors have tried to convey how much Tozer’s work means to them.

“One particular young man was in an accident and had some injuries,” said Jerry Schrop, the cemetery superintendent. “He considers himself a disciple of Tozer. He works down in Tijuana, Mexico, passing out tracts.”

The man’s last wish is to be buried near the pastor.

“To pacify the guy, I told him if he was cremated and brought his ashes, I’d put him somewhere near there,” Schrop said.

The Rev. Jonathan Carey, pastor of Ellet Grace Brethren Church near the cemetery, grew up reading Tozer’s books and owns several titles. His favorite may be The Pursuit of God.

“He comes across very passionately,” Carey said. “A 20th-century prophet is how he’s been described. He read the church fathers and the mystics and applied that to the 20th century.”

Carey was surprised when he learned that the author’s grave was across the street, but he wasn’t surprised by the public’s interest. He wanted to look, too.

He joined a visiting Brazilian missionary who had asked about the grave. “We were moved by the simplicity of it,” Carey said. “It’s just a ground marker.”

The epitaph “A Man of God” couldn’t be more precise.

“Something simple, and yet so profound,” Carey said. “That seems to be the testimony of his life.”