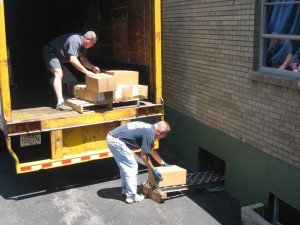 When the semi-trailer backed up to the BMH loading dock today, it brought a new printing of several hundred thousand copies of BMH’s premier gospel tract, “Life’s Most Important Question.”

More than five million copies of the tract are now in print, in version that include King James scriptures (KJV), New International Version (NIV), and Spanish. The original version of the tract was generated out of an evangelistic campaign in Africa in the 1970s directed by GBIM missionary Wayne Beaver.

Periodic reports come in to the BMH office of people who have effectively used the tract in witness, and of people who have found a relationship with Christ through it. BMH is grateful for the financial and prayer support which make it possible to produce life-changing literature that has lasting effect for Christ’s kingdom.