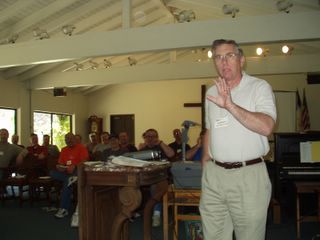 The Tracy, California, Grace Brethren Church (Robert MacMillan, pastor, pictured) has been targeted by a notorious hate group for picketing on Sunday, June 12, according to news reports.

The Tracy church, along with five other Tracy churches and the local high school, will apparently be picketed by one of two teams from a Kansas church well-known for its inflammatory language and in-your-face tactics regarding homosexuals and ministry to those in the homosexual lifestyle.

According to MacMillan, the controversy started when the local newspaper, the Tracy Press, reported on a conversation a former member of the Tracy church had about supporting President Bush and the importance of the moral issues of abortion and homosexuality in the making of his decision.

The paper called for comment from several local pastors, including MacMillan, who had previously been published in the paper on the issues of homosexuality and free speech. MacMillan’s position was that the Tracy church has a principle of “hating the sin and loving the sinner,” and it was that comment which apparently inflamed the Kansas group.

MacMillan is meeting later this week with Tracy police to arrange logistics for the Sunday the picketers will be present, and says “we are going to go ahead with business as usual.”

MacMillan plans to fully inform the elders of his church, and then inform the congregation that they will not engage the picketers in conversation or debate.

Ministry opportunities are already emerging from the situation. This evening, MacMillan has been asked by the church’s youth leaders to have a question-and-answer session with high school students about the Bible’s teaching on homosexuality and what the Christian response should be.

“We are all trusting God to bring good out of it,” says MacMillan. Grace Brethren people around the country are urged to pray for MacMillan and the Tracy church over the next month, that this unusual visibility will give opportunity for God’s Word to be clearly taught and for the Holy Spirit to reach many with the message of God’s love and forgiveness.