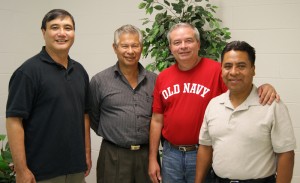 “I told him [that] we need to have him come and lead a Bible institute, using our church facilities and the classroom space that we have,” remembers Zakahi. “He looked at me with amazement and said that he had just been praying about this about an hour before.”

The two began meeting weekly. Soon they invited two other Hispanic pastors, Abner Solano, church planter and pastor at Iglesia Vida Nueva, Grandview, Wash., and Miguel Sanjuan, pastor of Iglesia De Los Hermanos, Yakima, Wash., to join them. Even in the early days, Marenco could see the future success and suggested they take photographs to chronicle the beginning, according to the Sunnyside pastor.

In May, it is expected that 11 students will comprise the first graduating class.

The Institute’s goal is to train pastors specifically for the purpose of planting new Hispanic churches in the Yakima Valley, the fertile south-central region of Washington State, where Spanish-speaking residents make up approximately 80 percent of the population.

“We are considering the planting of Hispanic churches alongside the Goldendale, Harrah, Kent, Sunnyside, and Toppenish Grace Brethren churches,” says Zakahi, “as well as in the Naches area in the Valley, where there is currently no Grace Brethren church, and in Walla Walla.”

Bible Institute student Edgar Arreola is working alongside Chris Carlile, who is planting an English-speaking church in Walla Walla. Edgar drives one and one-half hours each week to come to the classes in Sunnyside.

Zakahi hopes that by equipping Spanish-speaking pastors they will reach the younger generations whose parents and grand- parents might not bring them to an English-speaking church. It also might address a growing gang problem in the region. There are many good programs in place to keep youth off the streets, according to Zakahi, “but what’s missing is the Gospel that transforms lives.”

Solano emphasizes the importance of the Institute because of the lack of trained people in the area. He says that most of the students come to the Institute with only an elementary education. Many are migrant workers. “They work hard,” he notes, “and they make sacrifices to come to the Bible Institute.”

While the classes are designed specifically to train pastors, the faculty encourages women to take some of the courses in order to gain leadership experience.

Currently, classes in the Institute are led by five professors: Marenco, Solano, Sanjuan, Simon Perez (described by Zakahi as a ‘stand-out student’ and older gentleman who is a general con- tractor), and Adrian Showalter, a Spanish-speaking member of the Yakima church who moved his family from Akron, Ohio, to be involved with the ministry.

The effort has had some unexpected side effects. “Meeting consistently with the Hispanic pastors has formed deep friendships, not just with me, but with our Grace Brethren district ministerial group,” observes Zakahi. “The Christmas dinner for pastors, pastors’ wives, and church leaders, hosted by the Mabton Hispanic church and led by Pastor Juan Marenco, drew about 50,” he adds. “It was such a fantastic time and the mingling between Anglo and Hispanic families was superb.”

Zakahi also notes that considerable communication flows between him and the Hispanic pastors. “It includes the sharing of praises, advice, and counsel in difficult church situations,” he says. “It has been deeply encouraging for me to see this kind of fellowship develop and grow.”

This article appeared in the Winter 2013 issue of GraceConnect, the magazine for the people of the Fellowship of Grace Brethren Churches. Click here to see the entire issue.