Trees Are Sold: Orphans Will Benefit 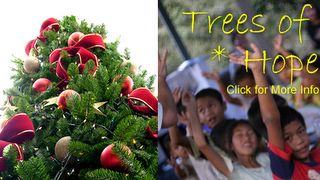 This blog, on November 24, ran a posting about East Side Grace Brethren Church in Columbus, OH, selling Christmas trees. The church hoped to raise $3,500 over the next several weeks to fund the construction of a new kitchen and recreation room for Asia’s Hope orphanage in Phnom Penh, Cambodia.

The trees went on sale Friday, Dec. 2 and were only available on Fridays, Saturdays and Sundays. The tree lot was staffed by members of East Side’s home groups. Although the plan was to keep on selling trees until Christmas, in hopes of selling the needed amount, God had other plans.

As of this afternoon, the front lawn at East Side is vacant. All the trees were purchased by yesterday afternoon. Perhaps even more astonishing, though, is the fact that the total exceeded the goal.

So, the orphanage will get a new kitchen and recreation room, and the pastoral staff and home groups at East Side are hard at work seeing where the excess money can be put to use, probably in a missions-related way.

Some people have inquired about what other Grace Brethren churches were participating in the Trees of Hope campaign. The campaign and its advertising originated at East Side, but it is the hope of several that other churches might want to do similar programs at their locations in the future, since there are always missions or children�s organizations that have financial needs.

Thanks to Pastor Chip Heim, East Side’s senior pastor, and Pastor Nate Harrison, pastor of adult ministries at East Side, Jeff Floit, one of the home group leaders, and John and Kate Ward who caught the initial vision of trying to help the orphanage.

If your church would be interested in trying to raise money for a good cause by selling Christmas trees, please feel free to call Nate Harrison at East Side GBC at (614) 861-5810. Many of those involved are planning on starting earlier next year and finding another ministry to fund.