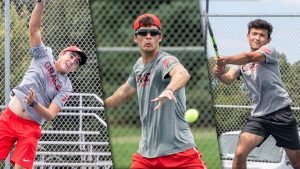 Three members of Grace College’s men’s tennis team were recognized by the Crossroads League at the end of the fall season.

Max Rozas, Fabricio Galvan and Pavle Popovic all earned a spot on the All-Crossroads League Team for the Lancers. Only Indiana Wesleyan (5) had more All-CL honorees than Grace.

The Lancers finished the fall with a 9-4 record. Grace went 7-2 in the Crossroads League to finish third, and the Lancers reached the semifinals of the CL Tournament under head coach Andy Lewis.

Rozas’s other big accomplishment was winning the ITA Regional Championship, never dropping a set throughout the 64-person tournament. He plays this week at the national ITA Cup in Rome, Ga.

His doubles’ partner Fabricio Galvan went 11-0 in doubles. He went 6-5 in singles’ play, amassing an overall record of 17-5.

Popovic was steady at singles and doubles with an overall record of 17-8. He went 9-4 while playing primarily at No. 1 doubles and also went 8-4 at No. 2 and No. 3 singles.