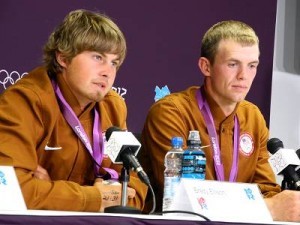 Jacob Wukie (right) is one of several current Olympic competitors with connections to Grace Brethren churches. Wukie, an archer who won the silver medal in early competition, is from Grace Community Church (Kevin Pinkerton pastor), a Grace Brethren congregation in Fremont, Ohio. Wukie was in GBB (Grace Brethren Boys) in his younger years and is now engaged to be married to the daughter of the pastor.  Additional information about Wukie may be seen at these websites:

As noted earlier, water polo team member Tim Hutten’s family is from Grace Community Church of Seal Beach, also a Grace Brethren congregation. Vicki Barilla of the church staff describes Hutten’s mother,  Cynthia (Cindy) Hutten-Eagle, as “one of my best friends” and says the Seal Beach family is following Hutten’s competition with great interest.  Further information on Hutten may be seen at: